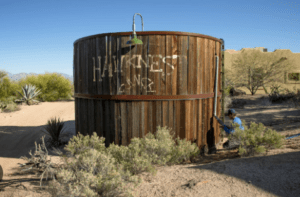 The potential consequences of water security in a high growth area that also happens to be in a desert have been looming over the valley for quite some time, and Ground Zero for that looming crisis has been the Rio Verde Foothills on the outskirts of Scottsdale. We have written about this crisis previously, and while the question was up in the air then, that question has been effectively answered: the Rio Verde Foothills will not get any help from Scottsdale.

We learned recently that Scottsdale city manager Jim Thompson effectively closed the door on any possibility of a short-term water deal. In a significant back and forth with outgoing Councilwoman Linda Milhaven, Thompson effectively says that it is not the obligation of the city to broker such a deal, and that a short term deal would likely turn into a long term deal, which would not be in the best interest of the city.

Milhaven made a strong retort that the city of Phoenix entered into a similar short term deal with the Anthem community, which has worked out for all parties involved. Milhaven bravely called out what seemed to be multiple inconsistencies in Thompson’s reasoning; perhaps being an outgoing councilmember is an emboldening catalyst to be honest and forthright in a way that one wouldn’t otherwise be.

So where does the community stand now in its search for water? They still have one potential avenue for government assistance: the state Supreme Court. The court could potentially compel the Maricopa County Board of Supervisors to reconsider their previous vote and to work out a solution; they had previously declined to do so. However, this has the feeling of a hail mary attempt almost definitely relegated to failure. The community will in all likelihood need to have water trucked in from further away at a significant cost.

The very reasonable argument could be made that personal and corporate responsibility should take place. After all, the developers seemed to circumvent rules in order to work around the 100 year water supply rule that is needed to be satisfied in order to build. And something could also be said about personal responsibility for individual home purchasers, that they should have made better decisions about purchasing a new home in an area that was unsustainable by its very nature. That said, in all likelihood the balance of pain will almost certainly be shouldered by the homeowners and not the developers, which is unfortunate.

So except for a last gasp attempt, the matter is likely settled. Perhaps we are seeing a new phase in the water crisis, one of nativism and “municipal nationalism”, where each city or town looks out for themselves first and is more willing to give a cold shoulder to others in the wake of dwindling water supplies. If water supplies from the Colorado River continue to dwindle, we can probably expect similar battles to play out throughout the state.