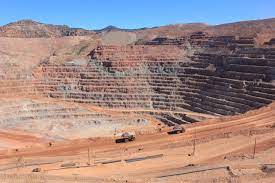 Us at the Arizona Progress Gazette take seriously our duty to provide for you well thought out and reasonable takes (not hot takes, but perhaps medium/mild takes), and we do love to talk local politics. We love to mix the quantitative with the qualitative and add a few dashes of insider baseball to figure out what’s really going on. In the spirit of that ethos we are starting a new weekly segment called “The Breakdown”.

In The Breakdown we will take one statewide race and really dive into how each of the primary races are lining up to give you a quick yet meaty picture of how each of those races are looking right up until ballots are mailed out for the primary. And for this week’s Breakdown, we are going to dive into Arizona’s uniquely Arizonan jewel of an elected seat.

We are the only state that elects a statewide Mine Inspector. The mining industry has an estimated economic output of $6.5 billion annually in Arizona yet is a quiet behemoth that is easy to forget about for us in the Valley (out of sight, out of mind). Why we still elect a Mine Inspector as opposed to having our Governor appoint one is a question that has been circling around for a while now, even brought up by candidates for the seat. We choose to embrace the oddity of it while we still have it however.

First of all, we are sad to announce that the race for Mine Inspector will be over after the primary, as no Democrats made the ballot for the 2022 election. For any true Arizona political nerds, this is likely sadder than it would seem at first look, as 2018 candidate Bill Pierce turned into something of a folk hero not just because of a deep knowledge of mining and real charisma, but by looking absolutely amazing in the process. Check out #TheLegendOfBillPierce on Twitter and pour one out for what might have been this year.

Earlier this year it appeared as though the Republican primary could get awfully spicy with three declared candidates, each with something resembling legitimacy. Amanda Beaudoin was the Chief Geologist with a mining company who as a younger woman was poised to add a different dynamic to the race. Duane Yantorno seemed to be carrying Bill Pierce’s 2018 torch by supremely looking the part. But Paul Marsh had the easiest pathway to re-election; after previous Mine Inspector and part-time Notre Dame mascot Joe Hart stepped out of the role in the middle of his term, Governor Ducey appointed long time mining safety inspector Marsh to the role. With Ducey’s support and the power of incumbency in hand, the first major hurdle in winning a statewide campaign, getting the necessary signatures to appear on the ballot, was merely a speedbump.

The same could not be said for Beaudoin and Yantorno however. Both were participating in the Clean Elections system, meaning that their hands were somewhat tied for early fundraising. Both seemed to have underestimated the amount of work needed to gather so many signatures without the support of party machinery. The apparatus that had activated for Marsh (and Pierce and Hart the election before) were not there for the challengers to Marsh. If they inquired about purchasing signatures, they would have quickly found that that solution was far beyond their budget.  Neither was able to get the necessary signatures to get on the ballot, and in both August and November, voters will only have one option to vote for or not: Paul Marsh.

As far as debuts go, we have to acknowledge that an uncontested race isn’t the sexiest way to kick off “The Breakdown”. We promise that that won’t happen again though, and we promise future spiciness. Tune in next week and hear the story of dying dreams: the race for State Treasurer.