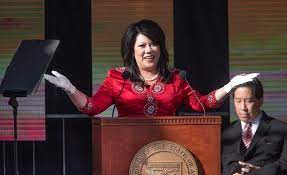 In our new segment called The Breakdown, we pick apart one statewide race and see how things are lining up for all of the candidates that will make it on the ballot. Last week we highlighted what will be an unfortunately boring Mine Inspector race, We thankfully get a bit more intrigue for today’s subject, the State Treasurer race.

So who cares, outside of those fiscal hawks and finance professionals? It should be worth noting that the Arizona State Treasurer seat is often seen as a strong potential stepping stone to the Governor’s seat, one which Doug Ducey capitalized on firsthand. And that brings us to our current Treasurer, Kimberly Yee. Ms. Yee had the dream of the 9th floor in her eyes and announced her bid for Governor last year to follow in Ducey’s footsteps.

With that announcement, several strong Republican candidates lined up to succeed her at the Treasurer’s office, most notably State Representatives Jeff Weninger and David Livingston. Livingston later dropped out, citing a desire to go into the private sector and leaving an easy path for Weninger to virtually walk into the nomination.

But not so fast: that resounding thud you heard early this year? The sound of Yee’s dreams falling from the sky and landing flat: with extremely tepid fundraising and not a compelling enough message (“look at me, I’ve already won statewide” doesn’t mean much post-Trump, it would seem), she dropped her bid for Governor.

But when one door closes, maybe the window is still open for you to crawl back into it and ruin someone else’s party. Yee immediately announced that she would be running for re-election to Treasurer, not even allowing for a hint of uncertainty but pairing her dropping-out and re-election announcements on the same press release. And with that, Yee single-handedly destroyed dreams of her own, this time Weninger’s. While it is still an active primary and Weninger technically still has a chance, Yee’s dismal gubernatorial fundraising was transferred directly and translates into a decent fundraising haul for a Treasurer’s race. With nearly $175K cash on hand, she dwarfs Weninger’s $45K CoH, and with the power of incumbency it seems clear that Weninger chose the wrong election to make a leap from the State Capitol.

As for the Democratic side? State Senator Martin Quezada is the only Democratic candidate, and with $60K CoH he has done a somewhat admirable job in fundraising, even if going the Clean Elections route almost certainly would have been a better option for him, where he would have received around $300K total for the primary and general elections. That said, between him being particularly bombastic on social issues, and a natural predilection of voters to favor Republicans for political seats involving money management, it is difficult to see a scenario where he receives a favorable outcome.

In summary, it looks like a fairly easy route to re-election for Yee, a nice consolation prize for a failed gubernatorial campaign. And for next week, we examine what will very likely be one of the most interesting statewide races that we will have this year: the race for Superintendent of Public Instruction.