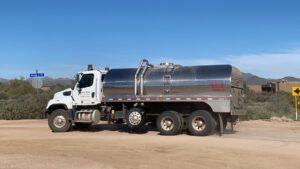 We don’t have to tell you that water is a subject of critical importance in our little slice of desert heaven, a subject that we have spoken about at length. Perhaps the one area that is the most intense and contentious Ground Zero for the water debate in our county and perhaps even the entire state and further is right here at the edge of Scottsdale.

The Rio Verde Foothills water debacle is not anything new; the subdivision was built without long term secured access to water, as the city of Scottsdale will cut them off at the end of the year, and this year has seen a mad scramble from the community to attempt to rectify that. Unsurprisingly, that scramble is playing out in Scottsdale city hall.

In what could be a harbinger of a 2024 mayoral showdown, the battle lines over Scottsdale’s assistance to the Rio Verde Foothills are now drawn between Mayor David Ortega and outgoing city councilwoman Linda Milhaven. Ortega has dug his heels in with the belief that the December 31st cutoff date must be absolute and unyielding, and Milhaven is attempting to broker a bridge solution that will involve trucking water in from the city at an above market rate, thus leading to increased revenue to the city of Scottsdale.

In what points to the multifaceted complexity of the situation, the county Board of Supervisors is also playing a role. The newest Maricopa County Supervisor (whose jurisdiction is Scottsdale and the Rio Verde Foothills) Thomas Galvin voted against a special water district for the community, but is now backing Milhaven in her plan for a bridge solution until more permanent access is secured (a process that is presumed to take two or three years).

The subject has gotten enough oxygen for known local journalistic provocateur Laurie Roberts to weigh in on the situation. While Roberts does thrive on calling politicians out much more than giving them accolades, she generally has a pretty strong compass when it comes to good governance. Her unequivocal call-out of Mayor Ortega is a bit surprising, especially seeing as how I don’t recall her taking a strong stance on Scottsdale politics since the days of Guy Phillips.

Milhaven, along with Tammy Caputi, are both considered to be likely candidates for Mayor against Ortega in 2024, and the water crisis is lining up to be a significant issue that candidates will speak to. And now, the battle lines are drawn: Ortega seems content with letting the Rio Verde Foothills deal with the consequences of development in an area without secured water rights, and Milhaven is willing to try to toss them a lifeline in a manner that benefits the city.

Which view will be the winning one? It’s difficult to say, but considering that Milhaven has Galvin on her side along with some powerful interests, the ball is in Ortega’s court to demonstrate why his view is the best one for Scottsdale. The stars seem to be aligning for a nativist strategy of protectionism over the city of Scottsdale as he pursues re-election..