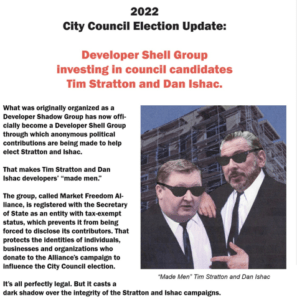 The first election is thankfully right around the corner, so we will get a reprieve from the political ads for a brief few moments. But in the meantime, partially lost in the shuffle of the competitive primaries in Arizona is the Scottsdale City Council race. And some significant battle lines are being drawn around the issue of development.

Indeed, the most pressing issue of this election is almost certainly the subject of development, whether we want to build more (YIMBY) or less (NIMBY). Regular readers know where we stand on this subject, but how is this issue playing out for this race? Some local activists give us some clues.

A local email newsletter has made it clear where they believe the battle lines are drawn. The attached email ridicules candidates Tim Stratton and Daniel Ishac for their donations. Both have received significant donations from leadership within the Riot Hospitality Group, the owners and operators of several Old Town clubs and businesses. The same organization also gave significant financial assistance to Tammy Caputi and Suzanne Klapp in their successful runs in ‘18.

Additionally, graphics posted by frequent and vociferous supporters of NIMBYism have made it clear who their preferred candidates are: Kathy Littlefield, Barry Graham, and Pamela Carter. Littlefield is no surprise at all, as her tendency to vote down multifamily projects is well known. Barry Graham’s time as a Planning Commissioner must have given them sufficient clues as to which way he will lean. Pamela Carter is the big surprise here though; her focus on mitigating sex trafficking seemed to lean more towards being a niche candidate getting her cues from national messaging and not local needs. 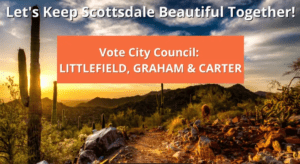 Also notable is that all three candidates seem to be very strongly aligned with the Republican party, with Graham having been in local party leadership. We must wonder aloud if NIMBYism is becoming a facet of a bit of a local purity test for the Scottsdale GOP, much like stricter immigration standards are at the state and national level.

Candidates who get over 50% in this election will automatically be elected, but since there will almost certainly be leading candidates who do not hit this threshold, and as such the run-off election will be in November. But Tuesday will be an important first look into whether the NIMBY or YIMBY set will set the course for the Scottsdale City Council for the next few years.