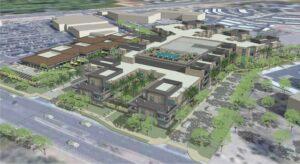 We all could use a second chance or two in life. Often times when a development project is deemed insufficient within city councils, they don’t often get a good second chance. The cost of starting from scratch or making the changes necessary to please those in charge is too high and simply not worth it.

We have written about Ironwood 92, the mixed-use development that certainly seemed to have all the makings of a quality project yet met its demise in Scottsdale’s “Council of No” for not checking every single box of “quality development” in the eyes of some. During a recent City Council meeting, it became clear that they did not have the votes to get a favorable outcome.

The group has since…regrouped. They are now moving forward with the project in a rebrand of sorts; a new name and 17 other changes. We are pleased to see that this rebrand flew through a mostly procedural vote with the Scottsdale Planning Commission at a 6-0 tally in favor of it being allowed to be reviewed earlier, that it was definitively a different project.

The developers clearly took to heart the weaknesses of the project that City Council and the Planning Commission had previously highlighted and adjusted accordingly. Also notable was that for this vote, there was no organized fight against the project.

Could we actually continue to get favorable votes for this project? A 6-0 vote in the Planning Commission is a fantastic sign, even if it was mostly procedural, and it would still need to go up for approval from the same Planning Commission. That said, if this momentum continues, Councilmembers would have to answer some hard questions as to why they would work against the wishes of the Commission and continue to be against what clearly seem to be good actors. At this point, fighting against it seems little more than obstructionism for the sake of it rather than reasonable objection.

Unfortunately it seems that virtually no projects, as well constructed as they may be, can sail unimpeded through this iteration of Council. We imagine that there will be at least two votes against it, two of the more strident anti-growth members whom we will not mention here. However, this is a good sign that the tide of development might finally be turning, and that there is a reward for listening, learning and adjusting.