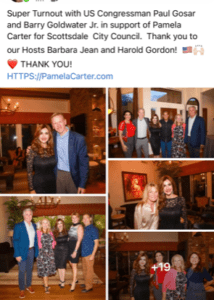 As you probably know, there will be a run-off for the final seat on the Scottsdale City Council, as Solange Whitehead and Kathy Littlefield secured re-election after the first round but no candidate cleared enough votes to avoid a run-off for Linda Milhaven’s seat. We have already written about this race and the endorsements therein, but there was one development that we did not anticipate and gives us reason to give this race another look.

We knew that Barry Graham, as a former member of local GOP leadership, would cater to and court a large subset of the local Republican party. But the much more interesting dynamic of this race is that it seems to be turning into a proxy war between the hard-right wing versus the more mainstream wing of the Republican party.

This became much more clear as Congressman Paul Gosar headlined a fundraiser for Pamela Carter. It seems quite odd that Gosar, who represents much of rural Arizona, would be so interested in a Scottsdale city council race, until one looks at it through the prism of the current conflicts within the Republican party. Gosar is a darling for the more extremist elements of the GOP, the ones who believe that any negative event is an FBI false flag and that those who charged the Capitol on January 6th were actually saving the country.

In our initial summary of the race, Pamela Carter registered as merely a blip on our rundown, as her then-primary focus on her website was stopping child sex trafficking. No serious person who follows municipal elections would consider that anywhere near their top priorities; past that, it would be considered laughable to serious people, but apparently it was critical enough to Carter for it to warrant top billing. It made no sense until we combined that with her support from Gosar.

Gosar was also a significant “wink nudge” promoter of the QAnon conspiracy theory, which believed that the Democratic party was led by a cabal of child sex traffickers, leading to the absurd “pizzagate” event where an armed gunman stormed a pizza place in Washington DC under the assumption that children were being kept for sexual slavery. What he found was a bunch of terrified adults and kids: not terrified because they were kept captive, but terrified of the armed gunman now in their presence. Serious people understand that this is ridiculous, but apparently not Carter as she made this a centerpiece of her campaign.

While Barry Graham leans much closer to the NIMBY crowd than we would prefer, he’s at least a serious and reasonable person who wouldn’t offer up the potential for brand damage for our city. Pamela Carter’s canoodling with the regrettably extremist elements of the GOP strongly implies the possibility (maybe even probability) of her making city council a spectacle. Scottsdale is better than that. We should keep fringe views away from our city’s leadership and leave them where they belong: on the fringes.