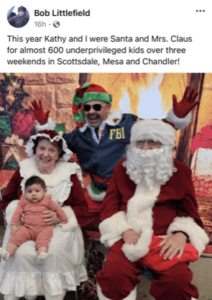 The holidays can often bring out the best of us, as our collective spirits look towards giving back and making the lives of others just a bit better, if only for a short time. And while politics often brings out the worst of us, when the latter can be used to bring light to the lives of others, then we are all about it.

It is with this thought in mind that we bring up a recent post by Bob Littlefield. As you are likely aware, Bob’s wife Kathy has long been a member of the Scottsdale city council as was Bob previously. As shown in the attached Facebook post, they played Santa and Mrs. Claus for nearly 600 underprivileged kids over three weekends across the Valley.

Some of the more cynical of us might say, they’re politicians…obviously they’re doing it for political purposes. But Kathy Littlefield is about to be termed out of office, Bob already had his run, and plenty of the work was done outside of Scottsdale where they wouldn’t be recognized. There was little to gain politically from these actions, but that doesn’t mean that there was nothing to gain.

And what is there to gain? It’s hard to condense it down to anything that doesn’t sound like a Christmas cliché, such as “the spirit of giving” and the like. But we all know the joy of making someone’s day brighter, and we all know the gratification of giving a gift to a loved one that truly resonates with them. To be able to do so for children who have had precious few good days in their life, and I’m sure that their joy was hard to hide. It certainly would make the role of jolly Clauses an easier one to play.

While not everyone has always agreed with the Littlefields’ stances on issues (as is a given in the political sphere), they have always conducted themselves with decency. And even if you strongly disagreed with them, we hope that you can take a step back and respect kindness and decency and honor the people who exemplify that.

So cheers to the Littlefields, who are showing that public service isn’t purely relegated to what happens within the council dais. If the world had more people like that, we would all be better off.