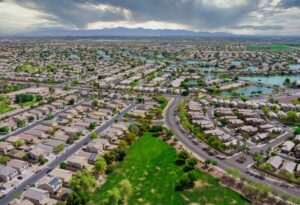 The nearly absurd rise in housing prices which has led nearly directly to a rental crisis in Arizona is a major pressing issue that we have been on top of here at the Arizona Progress Gazette. Recent interest rate increases from the Federal Reserve have served the purpose of pumping the brakes on the economy, raising interest rates, and halting the precipitous increase in housing prices. But a recent story demonstrates that all is not well in the local rental market, and more still needs to be done.

This fantastic article by Catherine Reagor at the Arizona Republic puts some more precise numbers to where we are at when it comes to our housing crisis. Essentially, rents have ticked down, but not materially. And while there is a good amount of housing projects in the pipeline in the city of Phoenix at least, it does not seem to be enough.

After all, the Phoenix metro area ranked 5th in the nation when it came to attracting 20-34 year olds from elsewhere. A robust job market and nice weather are likely the main catalysts, and these are precisely the people who we 1) want to attract, 2) are in the market for apartments, and 3) our housing policies don’t seem to consider.

Also worth considering is the typical demographic of steadfast NIMBYs, especially the most vocal ones. Many are in retirement or close to it, those with too much time on their hands. While it is important to have a good neighborhood to retire in, it would be economic folly to place their concerns on a pedestal while completely ignoring the needs of up-and-coming wage earners. After all, they are the ones who are most responsible for economic growth and value added.

While this is a problem that is felt around the state, it is felt most acutely in Scottsdale as many recent studies show. So considering that there is a large unmet need in a high-demand area that is most attractive to younger wage earners, as well as an iffy pipeline of projects that still need to go through the regulatory process, a potential perfect storm still awaits.

As we have said repeatedly and will continue to say, the best way to address this issue is to build, build, build. It is imperative that we listen to the lessons learned in Economic 101: that the best way to reduce prices is to increase supply. While we don’t expect our elected leaders to be Economics PhDs, this is a common sense approach that our city would be well served by adopting.