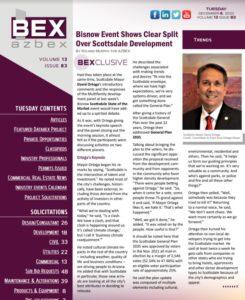 Is it too early to look forward to the 2024 Scottsdale Mayoral race? Well we are confident that Mayor David Ortega is looking forward to his re-election campaign, and based on a recent post from Councilwoman Tammy Caputi it looks like we may have someone else who is similarly looking at that race with opportunity in their eyes.

We found this recent post from her to be an intriguing shot across the bow. It highlights a newsletter from the Arizona Builder’s Exchange (AZ BEX), a local development-focused organization, and refers to a recent “Scottsdale State of the Market” event from Bisnow, a national digital marketing agency focused on commercial real estate news.

For any new readers, you are welcome to check out how we feel about the issue of development in Scottsdale and environs here. We are pro-business and pro-quality growth. Our first instincts are to want to spark investment, not scare it away.

As it pertains to the builder’s forum we must give Ortega a slice of credit, as he was clearly walking into the lion’s den to give the keynote address. He may be softening his tone and learning to say Yes a bit more often, but according to AZ BEX he came in swinging; talking about the opposition to the Scottsdale General Plan and how he overcame that. However, characterizing his tone later on as “yelling”, while it’s tough to gauge how much was actually his volume and how much was editorializing, it’s clear that it was a somewhat combative atmosphere.

This is in sharp contrast to the coverage that AZ BEX, as well as the Bisnet conference, gave to Councilwoman Caputi. She was featured as part of their Multifamily Market panel, and she was immediately given the opportunity to counter Mayor Ortega’s statements. She did so in a professional but firm manner, stating that while Ortega speaks to a balance in our development that that does not truly exist in reality.

She also stated that she will be the only “pro-business, forward-thinking, pro-development Councilmember” on this current iteration of council. We love to hear that from her, except for the fact that a Coalition of One will undoubtedly make getting anything passed difficult.

This certainly felt like opening salvos for a potential run for Mayor, as well as one candidate trying to coalesce the entire business community behind her and stealing the spotlight. Will the public view on development shift before November 2024? We can’t say for sure, but the potential Caputi-Ortega matchup (along with all the other potential interested parties) will be worth the price of popcorn.