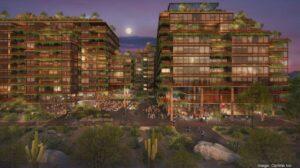 I know that on occasion that I can be a broken record about the need for more development, that building more will alleviate our pressing housing crisis and benefit so many. We have also been somewhat dismayed at the Scottsdale City Council’s recent inclination to get in the way of good developments moving forward; we coined the term “the Council of No” as a way to demonstrate our dismay.

However, one recent vote truly turned our heads and made us think that perhaps something changed. We couldn’t help but pour over this 4-3 vote in the Scottsdale City Council to green-light the proposed Optima North project in north Scottsdale. The strangest part? Notoriously growth-hesitant Mayor Dave Ortega and Councilman Tom Durham joined the yes votes.

And we have to ask: what the heck is going on here? Has hell frozen over? Are election year decisions coming a bit early?

We only say this because this seems like just the sort of project that Ortega specifically would be saying no to: lots of height and significant density. 1,330 units would be considered incredibly large for this Council, and 118 feet tall buildings have rarely made it through this iteration. Railing against those two aspects of development were core aspects of Ortega’s campaign, after all..

So what changed? Why is he now a yes vote when he has consistently been against similar projects since he was elected Mayor? We can’t consider this a strategic, low-impact Yes vote that would have no influence on the project, considering the small margin of victory for the project. Has the tide finally turned, right after we had expected Council to take a hard turn towards an anti-development ethos?

It may be possible that the project had enough merits to convince Ortega and Durham. After all, Ortega is well known as a fan of mixed-use developments, and this is certainly a well thought out development. But so were numerous others that didn’t pass through the gauntlet of the Council of No..

We very much welcome this new development but can’t help but look at it with a bit of cynicism. Perhaps it is time to start greasing the re-election wheels early, or at least soften up potential future opposition. Whatever the reason, it’s a good start, and while we have serious doubts we do hope it’s the first Yes out of many over the next two years.