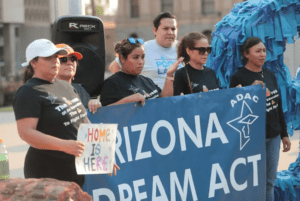 This year, along with all of the candidate choices you have, you will have the option to vote for Proposition 308. Prop 308 would allow Dreamers, or non-citizen students except those considered to be nonresident aliens under federal law, to receive in-state college tuition when a student (a) attended school in Arizona for at least two years and (b) graduated from a public school, private school, or homeschool in Arizona.

So why is this the right choice? Let’s start with a general fairness doctrine. Nearly all of us would agree that children should not be punished for the sins of their parents; this is not North Korea, we don’t jail entire families because one person in the family attempts to leave. The fact that their parents brought them to this country as young children, something that they had zero say over, should not be a reason to treat them differently, all else held equal.

It should be acknowledged that while some people decry preferences given to others who look different than them, this is not preference. This is simply treating these students the exact same way as their documented counterparts. Quite literally, the only difference is that these students don’t have an American birth certificate. They check all of the other boxes.

Additionally, immigration is incredibly important to our country. Yes, it is always preferable to go about it the correct way, but that is not an easy endeavor. Between bureaucracy and a lack of resources, the waitlist is incredibly long, and it can often take a decade to move through the byzantine maze that is gaining citizenship, especially when one is not considered to have a valuable, technical skill set.

That said, we want a country populated by people willing to work hard, and regardless of how you feel about illegal immigration, nearly everyone will acknowledge that those immigrants are wlling to work incredibly hard. So what about their children? Isn’t it safe to assume that they will have gleaned some of that drive and will take it forward with them in education and their future careers? Those are the sorts of people we need.

Yes, immigration is a hot-button topic that inflames many on both political sides. But this topic shouldn’t. This is the right thing to do, not just for those students but for the future of our area. Proposition 308 deserves your Yes vote.