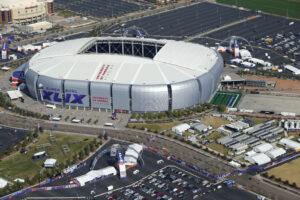 You may know that State Farm Stadium in Glendale will be hosting the Super Bowl in 2023. You probably didn’t know that Scottsdale will be on the hook to the tune of $2.3 million in taxpayer funds for it. When we saw this, we had questions, as you likely will to. First and foremost is the question: are we subsidizing the NFL? Why aren’t they paying for these improvements?

First of all, what will the funds be used for? $1 million is budgeted for extra police patrols, as Old Town will very likely be one of the centers of nightlife for visiting revelers. An additional million will be budgeted towards “beautifying” Old Town in preparation for those visitors, and an additional $300K as part of a shared contribution from the cities in the Valley to assist in the efforts via a financial sponsorship.

As Mayor Dave Ortega notes, much of the broadcasting will take place in Scottsdale, so an opportunity to make our city look great to a gigantic international audience seems like a very reasonable investment that will likely pay for itself via future tourism dollars. We appreciate the thought of pre-game shows with a backdrop showing our city, perhaps a segment or two wandering through Old Town and highlighting its excellence.

But the question we would have is…why does the Scottsdale taxpayer need to be on the hook for this? The NFL made $15 billion in 2019 (before a revenue-diminished 2020 season) and is on target to make $25 billion a year by 2027. The Super Bowl itself is estimated to bring in nearly half a billion in advertising revenue alone. The NFL is a behemoth that is more-than-capable of helping pay for these cosmetic and security upgrades, why should the average Scottsdalian who had no say in where the game was played shoulder that burden?

As for the merits of the expenses, spending money on overtime for law enforcement is certainly a good sign. To be in an area that is expected to be a nexus point for celebration can only be seen as a positive development along with being a strong economic driver. Additionally, while we remain on the more fiscally conservative end of the spectrum, we understand the power of investing and the importance of putting a great first foot forward when offered such a stage, even if the game won’t be played here. That said, this does have a bit of a “taxation without representation” feel to it.

It’s great that the NFL thinks that Old Town is ready for its close-up, it really is. But we didn’t need the Super Bowl to know that’s the case. We wonder aloud if it is worth it to get saddled with those expenses. The NFL could pay for this and not break a sweat; the taxpayer and the city shouldn’t need to break that sweat.