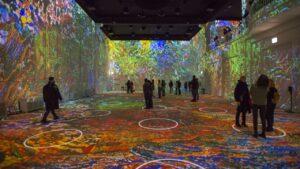 A frequent knock on the Valley is that its cultural scene is much like its climate: a desert. In another example of how this dated cliche is showing its age once again, Scottsdalians will be privy to a rare treat starting August 26th: a fully immersive exhibit of post-impressionist legend Vincent Van Gogh.

This exhibit will attempt to draw you into the turbulent and dark life of the painter, including photos projected on all walls in 360 degrees, and an animated video guiding the attendee through the points of his life and career that helped forge his abilities and build his legend. The painter was known for his distinctive brushstrokes and bright colors, with paintings such as “Starry Night” typifying this and taking on a life of their own long past the artist’s death.

The exhibit will begin at the Lighthouse Artspace on August 26th, after runs in several cities across the US and Canada. For those of you unfamiliar with the Lighthouse Artspace, it’s not just you; this space at the corner of Scottsdale Rd and Fifth Ave in Old Town was previously used as an office space. This exhibit is this space’s first use in an artistic capacity.

We for one applaud the transition of office space for use in the arts, especially in Old Town. Long known as a place for golf, great dining, and sunshine, it is clear that Scottsdale’s leaders have started to understand the value in diversifying their recreational offerings, as we have spoken about previously.. Between an added artistic presence in the area and kicking that off with a unique experience with one of history’s most lauded artists, this is yet another example of how Scottsdale and Arizona in general are growing into themselves and their legitimacy as well-rounded world-class vacation destinations.

It appears as though Scottsdale is in a special part of its growth cycle: it has long since figured out how to draw people in from around the world, but now it is learning to offer culture and help those who live here year-round to grow. It is giving people more reason to stay in Scottsdale. We applaud that wholeheartedly.