The city of Scottsdale isn’t exactly known for bold new ideas. The preservation of the past is actually a fairly important part of Scottsdale’s identity. As such, even relatively non-controversial ideas have a fairly tough road to implementation.

Any readers here have almost certainly been to street fairs; events where a road (or several) is blocked off, with vendor tents and foot traffic filling the street. The Temple Festival for the Arts is a prominent and successful example of this. Scottsdale is considering following suit, with initial plans for something similar written into Scottsdale’s general plan. The idea is a once-a-month street fair, not a regular disruption of local businesses. 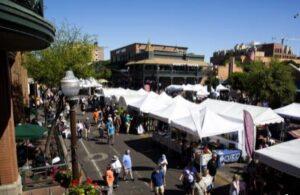 Why this is controversial, I don’t know. I suppose that for nearly any idea that comes to city councils, there are winners and losers, and as such there will usually be some opposition. However in my opinion the objections raised by Councilwoman Littlefield and a few business owners don’t hold weight.

The shop owners in the Scottsdale Progress article linked above seem to be concerned about a loss of business, but yet that strongly implies that they would have no interest in taking part. This sort of thinking typifies many of the old school, buggy-whip companies of the 21st century: what we’re doing now is working, why change it? And that line of thinking is how companies, cities, and cultures get left behind.

Councilwoman Caputi gets it in this case; something like this would generate a heck of a lot of foot traffic from people who otherwise wouldn’t think to set foot in some of these shops. How on earth is that a bad thing? As we move away from Covid and back to “normal”, it feels like being around lots of people in a fair setting would be quite refreshing. The most introverted of us aside, we could use this as a society.

It’s time that we stop clinging to an antipathy to change and be open to trying something new. A Scottsdale street fair seems like a great step in that direction.

Edit: I have recently learned that it was Councilmember Tom Durham who conceived this idea and brought it forward to council. Accolades and credit are due to him for thinking outside the box and being willing to put forth a new idea. Kudos!