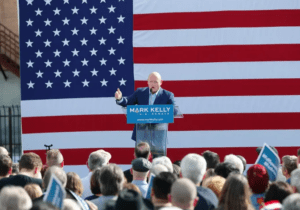 We are wrapping up our Breakdown series as your ballot likely sits on your dining room table, and we have moved up progressively from the least well-known and covered statewide races to the most. And so we end with the highest prize in the state: who will join 99 other Americans in the US Senate, and can anyone topple Senator Mark Kelly?

On the Democratic side, Kelly has the luxury of not having any primary challengers. Along with being able to hold on to more of his campaign funds: with nearly $39 million raised and $23.3 million Cash on Hand (CoH) as of the Q1 reports, Kelly has shown himself to be a prolific fundraising with the entire DSCC apparatus fully behind him.

Kelly’s delicate dance between the left and the middle has been a work of art. While he has not ticked off Democrats to a degree that nearly begs for primary challengers (i.e. the Sinema Strategy), he has also been safe to not fall into various progressive traps that energize activists but turn off everyday voters in a center-right state like Arizona. Additionally, the one area where he was often considered extreme on by Republicans, gun policy (being the husband of Gabby Giffords and all), is now turning into less of a potential liability and more towards a new normal, as recent mass shootings have prompted Republicans to cross traditional party lines and support more regulations.

Kelly’s tightrope walk matched with his fundraising numbers makes him an extremely difficult incumbent to bounce. That said, as we have talked about at length before, with the economy and inflation dominating headlines, this would be the year to do it. So who is up to the task of defeating Kelly?

The Republican field has come down to three viable candidates as well as two also-rans. Starting with the also-rans, there is the steep decline of Justin Olson. Currently an Arizona Corporation Commissioner, formerly an AZ Representative, and a Finance Director for Turning Point USA, the powerful conservative movement, the stars seemed to align for a strong run. But with $275K raised and $143 CoH, the powers that be that he presumed he could call upon have apparently betrayed him, and he has had to resort to appearing on Russian-sponsored TV to stick out. Not a good look these days..

There is also Mick McGuire, who is the Adjunct General of Arizona and a career veteran. With nearly $2 million raised and nearly $1 million CoH, clearly he has received significant backing from outside of Arizona, with a compelling career that would appeal to many primary voters. That said, both him and Olson are having trouble gaining any traction, and neither seems to be polling above 2%.

For the viable candidates, we will start with Arizona AG Mark Brnovich. Consistently the front runner from the start until the last few months, Brnovich has used his current office in a somewhat political manner as opposed to earlier in his time as AG, where he was often considered more objective. As his lead has slipped, Brnovich has seemingly come a bit unhinged, relying on increasing politicization of his office as well as nunchucks. With only around half a million dollars CoH, he has rapidly slipped to 3rd place, and many speculate that his attempts for relevancy will not just leave him with a 3rd place finish, but also a diminished reputation.

Jim Lamon is a clean energy executive that sold his company to Koch Industries for an undisclosed value that seems to be somewhere in the 9-figures. He has pledged to spend ungodly amounts of his own money to win this seat, and he was not lying: he has spent $6.7 million as of Q1. He has made…interesting campaign videos that have caught flack from Democrats (which obviously is a badge of honor in a Republican primary). He looked well positioned to come out of nowhere to win the primary, until…

Blake Masters, protege of tech billionaire and libertarian activist Peter Thiel, came in with the full backing of Thiel, and later on, President Trump. Thiel had a recent primary win with J.D. Vance in Ohio and looked to be with a losing horse in Arizona….until this month. Masters has surged into a double digit lead across a couple polls. It is worth noting that Thiel made his fortune partially with the use of data (and is currently minority owner of Palantir Technologies, a data firm trusted by the US military), a machine that he is no doubt bringing to his political races. While many political consultants act like they know data and marketing, this machine is actually truly cutting edge. The Masters campaign likely knows the last time you cried, your favorite flavor of ice cream, and who your celebrity crush is. Essentially, the next Cambridge Analytica.

Thiel’s machine understands the application of data better than anyone in Arizona politics, and perhaps national politics. One could presume that that same degree of expertise would be brought in on the marketing side: it is much easier to apply those professional principles to politics than for political wonks to be proficient at data and marketing.

It seems clear that Masters will win the primary at this point, which will lead to one of the most intriguing showdowns in American politics this year: Peter Thiel versus Mark Kelly. This will be a gigantically expensive race with deep pockets on both sides. The moderated temperment of Kelly matches up well against Masters, although Masters’ data machine gives it an edge there. This will almost certainly be an extremely tight race; we are inclined to give a small edge to Masters, but as with many things in politics, there are numerous October Surprises that can happen, be it inflation decreasing, Arizona abortion rules igniting passions, or anything else that can’t be seen.

It will be tough to pick a winner in such a close race, so we’ll just grab our popcorn and enjoy the ride instead.