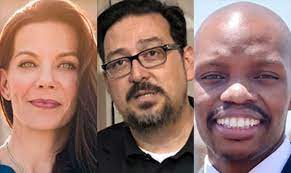 In this week’s segment of The Breakdown, we arrive at yet another open seat, and the one that is next-in-line to the Governor’s seat, Secretary of State. And it’s because of the 9th floor that this seat is open, as former Secretary of State Katie Hobbs made the slightly surprising and gutsy (or silly, depending on how it turns out) decision to vacate the seat after one term to run for Governor.

Since the Secretary of State’s primary role isn’t to exist as Arizona’s Vice President of sorts, but instead is the head of our elections here, perhaps there is more to her decision. After plenty of election conspiracies, after needing extra security because of threats on her and her staff, there is a reasonable chance that she was just done with it all. We can’t blame her; we also appreciate the opportunity it gives as a newly open seat.

This is also an interesting race in that it seems genuinely competitive in both primaries, at least on the surface. We will start on the Democratic side with a one-on-one showdown. Former Maricopa County Recorder (i.e. head of elections for the county) Adrian Fontes lost his re-election bid in 2020, but after a brief stint as an Assistant Pima County Recorder (almost certainly to set himself up for a statewide race), he threw his hat into the ring. He will face off against Reginald Bolding, the House Minority Leader with no elections experience but a host of connections in his role.

On its face, it should be a clear decision: the highly experienced and qualified Fontes, a very well known quantity with Dems in the county and with the majority of people in the state, versus a state legislator who is almost unknown amongst the normal voter. That said, Bolding has a significant Cash on Hand (CoH) advantage, $181K to $101K. However  he also has significantly more work to do to even win the primary, so we have to believe that Fontes will be victorious; he’ll almost certainly be broke afterward though.

Now onto the Republican side, it has clearly turned into a two-tiered race as it often does: the haves and the have-nots. The have-nots are two candidates who made grave mistakes in stepping away from the legislature to run. Shawnna Bolick, even with tenure in the legislature and being married to the former head attorney for the Goldwater Institute and current AZ Supreme Court justice Clint Bolick, has been a disappointment from a fundraising perspective, with a mere $64K CoH. Not to be outdone however, the quixotic bid of Michelle Ugenti-Rita, who seems to have expended much of her time on her fights with Kelly Townsend. She shouldn’t have had to learn the hard way not to pick an elections bill fight with a conservative darling if you’re going to run to head up elections, but we guess she did. At only $30K CoH, to call her campaign disappointing would be an understatement.

As for the haves, it comes down to two: former advertising executive Beau Lane and Representative Mark Finchem. Both have had surprising success with fundraising, with both starting to approach $1 million in funds raised and both having retained a majority of it: Lane with $631K CoH and Finchem with $587K. The money is only one part of why this particular showdown is such an interesting one; another is who the candidates are.

Beau Lane’s father started the advertising agency E.B. Lane which Beau started working at in the ‘80’s, and he was its CEO when he managed a merger with a digital marketing firm in 2013. One would think that he would be very well equipped to effectively advertise his campaign better than nearly any candidate. Meanwhile, Finchem has made waves by going to the January 6th “Stop the Steal” rally in DC (but apparently not in the riot…technically). He has been upfront about his desire to overturn the 2020 election results, including introducing a bill to “reclaim the electors”. He has been making every overture possible to appeal to the far-right wing of the party, or as political field organizers would put it, likely primary voters.

Finchem’s victory would be a major cause of alarm for Democrats nationally, which could cause a major flood of money coming in when it otherwise wouldn’t (to the same degree at least). In what should be a GOP-friendly year, it may not matter, but Beau Lane seems to be the best option to ensure a GOP win. Can he win the primary without all of the “conservative” bonafides? To be determined, but considering his background I’d put his odds at slightly better than even. It is thus our prediction that Lane squeaks out a primary win, and soon thereafter becomes our next Secretary of State against a compelling but cash-poor candidate in Adrian Fontes, running for the right role in the wrong year.