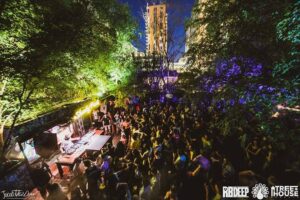 It’s funny how poor zoning decisions can lead to unexpected conclusions, like a truncated Butterfly Effect. For instance, when a retirement community inexplicably sets up shot right next the Arizona State campus and it leads to added nightlife and tax revenue for Scottsdale.

We are talking about the Mirabella/Shady Park fiasco in Tempe. For those who are unaware, Mirabella is a retirement community that started moving senior residents into it in 2020 during the beginning of the pandemic. It happened to be built right near Shady Park, a very popular nightlife venue well known for live shows (often EDM shows) in an uncovered area. Since at that time there were no live shows, it would have been easy to overlook, but once live music started again the elderly residents started complaining and filed a lawsuit.

The first question many would ask would be, why is a retirement community setting up shop just off one of the rowdiest colleges in the country? We have no good answer for that, and neither did the Tempe city council, which unanimously showed their support for Shady Park, having been much longer tenured. It was not enough however, as the judge favored Mirabella’s argument and sided with them.

What does that have to do with Scottsdale? Relentless Beats is the leading dance and EDM music promoter in Arizona and has thrown many events in Shady Park. On April 13th they were forced to cancel all shows at Shady Park, and since the party must go on, they chose a backup venue: Maya Day and Nightclub in Old Town.

Relentless Beats quietly shifted many of their upcoming events to Maya and turned them into pool parties in the process. This has and will continue to bring more people towards Old Town and represents a strong partnership with Riot House Entertainment, the owners of Maya. While this represents a significant loss for the city of Tempe and an inconvenience for all EDM fans in Tempe, it is a big win for Scottsdale and a furthering of Scottsdale’s reputation as the King of Nightlife in Arizona.

So we thank you, Tempe. You probably should have known better than to even allow a retirement community so close to campus in the first place, as these sorts of issues could have easily been anticipated. But Tempe’s lack of foresight became Scottsdale’s gain. We will happily take the additional tax revenue at the expense of our neighbor!