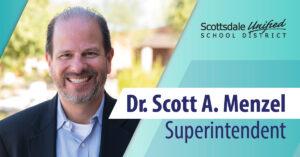 It’s been a strange last few months for Scottsdale Unified; between protests and swarms of angry parents to the Greenburg fiasco, it’s safe to say that all of SUSD’s leadership is under intense pressure. That may be manifesting itself in a conversation about compensation, as SUSD members are talking about changing metrics for Superintendent Scott Menzel’s pay.

All this is part of the normal semi-annual assessment of Menzel’s performance, where he is supposed to outline potential areas for improvement and review the metric for performance-based parts of his compensation. The desire to wrest control of these metrics was spear-headed by board member Dr. Libby Hart-Wells, and seconded by Patty Beckman. The board members are proposing having metrics related to college readiness attached to pay, with Menzel expressing some concern that these will not be easily measured.

All this comes with a turbulent backdrop to SUSD. Even before the Greenburg debacle which we have covered at length, 4 of the 5 board members are currently at risk of potential recall elections. They have statewide political candidates and national media organizations at their doorsteps and both campaigning and generating unnecessary outrage. And this is after the protests about the non-existent crisis of Critical Race Theory that was never on the docket for discussion in SUSD, but didn’t dissuade imbalanced and easily misled adults from getting outraged.

Meanwhile, we have been impressed with Superintendent Menzel’s leadership in a difficult time for SUSD. We have talked about how his approach towards Covid walked a fine line on a difficult subject. But before that he has done a great job at expressing how world-class Scottsdale is through our educational system here.

While there may be merit to questioning Menzel’s performance-based pay, we can’t help but consider the difficult backdrop for SUSD board members. It’s not hard to believe that they feel that they need to put on a tough front, to be tough negotiators for an upcoming recall election (or re-election in general). And assuming that that plays even a small role in this, that’s unfortunate. Menzel has done a fantastic job and has earned the benefit of the doubt, not electioneering.