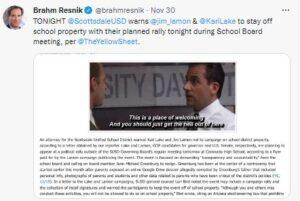 Never let a good crisis go to waste, the saying goes. And boy ohh boy, are SUSD and the Greenburgs ever in one heckuva crisis.

And who’s swooping down to try to steal the spotlight from them and using misery as a campaign event? Gubernatorial candidate Kari Lake and US Senate Jim Lamon. Lamon organized an event calling for “accountability and transparency” (sidenote: those words have been used as a bludgeon by so many politicians that they no longer mean anything) in which Lake also wanted to make an appearance.

And nevermind that electioneering and campaign events aren’t allowed on school property, which the Yellow Sheets has already pointed out.This is not a time for “facts”, or “laws”, or “full sentences”. This is a time to harness someone else’s anger and misplace it to benefit yourself!!

Look…what the Greenburgs did was gross. I hope to never see either of the in town; maybe they should go to Santa Fe or Modesto or anywhere far from here. But when Kari Lake talks about outrage yet she is calling for camera in classrooms to spy on teachers indoctrinating our kids with Commie Math? She can kindly fly much further away from Santa Fe. Or Jim Lamon, who is advocating for getting rid of mail-in voting because he desperately needs an angle to compete in the GOP primary, and fomenting lies to strongly inconvenience all voters isn’t beneath him it seems.

I hate what the Greenburgs did, but these two somehow make them look more like sympathetic figures. To use an educational pun, Kari Lake and Jim Lamon are like high school on Saturday: no class.