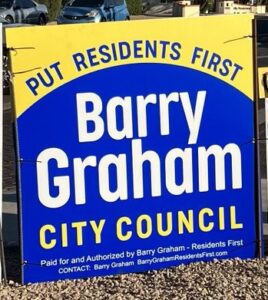 While the eyes of most tuned-in voters have largely been transfixed towards the more big ticket races such as those for Governor and the US Senate, it is worth noting that there were a few important Scottsdale-area races for which we currently have clarification for.

For starters, regular readers and those who pay attention to Scottsdale city politics know that there was one active city council seat to fill after Kathy Littlefield and Solange Whitehead got enough votes in the primary to avoid a run-off. As we somewhat expected, Barry Graham easily outdueled Pamela Carter with a 16 percentage point lead at the time of writing.

A few things to note with this race: one, the more development-friendy voice of Linda Milhaven is now being substituted for what some would call a more growth-hesitant voice of Barry Graham as the council and the tone and tenor of the electorate slides further towards the NIMBY side.

Secondly, while this race was one Republican running versus another Republican, it also had the dynamic of being one between a much more establishment Republican in Graham and one much more in the Trump wing of the party in Carter. Much like other “Trumpy” candidates around the country, Carter found out that there is a somewhat limited appetite for that style of candidate this year.

Also, voters were voting in two new members for the Scottsdale Unified School District Governing Board; you can get a brief run-down of the candidates here. At only around an 800 vote gap between #2 and #3 as of writing, this could still change by the time all votes are counted. However, as it stands right now conservative Amy Carney would be moving forward along with liberal Robb Vaules. What does that tell us? Well assuming that these standings hold, it could imply that perhaps Scottsdale isn’t as hard-right as we sometimes confuse them for. That our city desires some degree of balance in that regard.

Lastly, there was the question about raising the cap that schools can spend in a year to an amount that’s tied to the level from 1980 tied to inflation plus 10%. This is the same antiquated rule that has plagued the entire state and hasn’t yet been resolved at the statewide level except for a one year reprieve.. While this vote was seen more as providing an option to spend more with a large inflow of spendable funds as opposed to setting the stage for more consistent spending, it is passing by only a small margin. Perhaps this implies that while Scottsdale is getting a bit less socially conservative, overspending will always be on its mind.