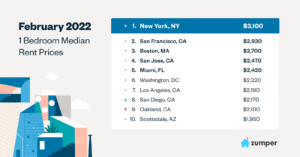 We have been shouting from the rooftops about the rental crisis here in Arizona and the inadequate responses from local leadership (and overreaching responses from Legislative leadership). If you’re a regular reader, this is nothing new to you. But now us here in Scottsdale have reached new heights in this regard; just not necessarily in the right way.

According to a study done by real estate analyst firm Zumper, Scottsdale has cracked the top 10 nationally when it comes to highest rents for one-bedroom apartments in the country. At $1,950 a month, Scottsdale has the most expensive rent for one-bedrooms in the state by a very significant margin. It is now higher than the likes of Anaheim, Seattle and Denver.

Yes, we will certainly acknowledge that Scottsdale is a great place to live, and that that is certainly reflected in the costs of shelter here. Yes, people will pay a premium to live in a word-class city like Scottsdale. However, one realtor who was quoted in an article that referenced this study said something that gave us pause.

According to the article, the realtor said that Scottsdale is a destination; that the WM Phoenix Open, Barrett-Jackson car auction, plus concerts and food and drinks in Old Town attract people to live. And yes, that is absolutely true. But that was also absolutely true 5, 10 and 15 years ago, before we had skyrocketed into the top 10, so clearly that is not the near-term factor for this spike.

We have an additional catalyst that led to this: the pervasive NIMBYism that has affected much of Arizona but most acutely Scottsdale, and the “Council of No” that gives those activist voices the time of day even in the midst of such a major shortage in housing options. Apparently those voices don’t care about you unless you own a property, and that’s unfortunate as that it keeps out many intelligent and young voices who want to build a burgeoning young career and don’t yet have the ability or want to jump into home ownership yet (especially at today’s incredibly elevated prices).

We really shouldn’t need more evidence of the problems that severe constrained housing supply is having on rent prices locally and statewide, but this serves as a great example. The real question is, are our local elected leaders going to get the memo? Our state legislators are, but if our local leaders jumped on the data and facts bandwagon, perhaps Scottsdale wouldn’t have to jump into a top 10 list that it really doesn’t want to be on.