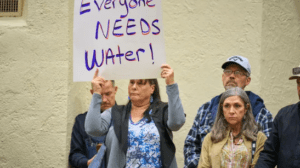 Regular readers are well aware of the water crisis that’s been unfolding in the Rio Verde Foothills on the outskirts of Scottsdale; if you have not kept up you can get up-to-date here. Now that the water cut-off deadline has come and gone the situation has gotten ever more tense in the unincorporated municipality, with the desperation of the citizenry being truly palpable.

A recent development has escalated the stakes considerably; the people of the Rio Verde Foothills have recently filed lawsuits against both Maricopa County for nixing the idea of a special water district, as well as the city of Scottsdale for stopping the temporary water arrangement that they had.

It would be easy to purely side with the people here, as the need for water is fundamentally understood. That said, it is worth mentioning that infighting between the residents seemed to be the reason why Maricopa County declined (unanimously) to not adopt a new water district, and the residents had a full year of warning from the city in order to find a new solution.

But the government is in the pole position when it comes to facilitating arrangements, and their role (or lack thereof) should be scrutinized.

When it comes to the county, this feels like it is more understandable. Establishing a new water district does appear to come with added complexity. It is not simply making a phone call or two, it is truly an undertaking. Considering the relatively small size of the community and their intense discord, it is understandable that they did not want to do so.

The reaction of the city is a bit more perplexing though. It would not have cost the city of Scottsdale any more to simply facilitate and extend a previously-established relationship; in actuality, considering that they were willing to pay above-market rates, it would have been a financial benefit. The decision seems to be one based on the concept of moral hazard, popularized during the Great Recession; essentially, if we bail out one bank we need to bail them all out, which would be morally unacceptable.

Mayor David Ortega has seemed to stake out the position of the Federal Reserve as Lehman Brothers was failing, and that they must be left to fail. That didn’t work out so well. And what is the outcome? The city will need to defend a lawsuit; views will be aired, money will be spent, and no one will be any better as a result except the attorneys, and perhaps (but unlikely) the citizens. Meanwhile, “compassion” has apparently become a dirty word in Scottsdale.

It feels like Mayor Ortega could have truly been a leader and built a compromise with benchmarks and timelines. It would have been a financial benefit for the city with the additional benefit of looking compassionate, decent, and truly the adult in the room. Instead, he chose to look like he was willing to rub their noses in the excrement, which is unfortunate. Great leaders rise to difficult moments, and that is not what is happening at the moment.