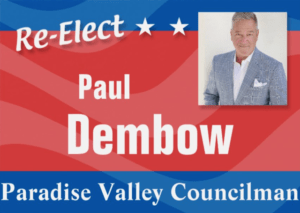 Here we go again: Paradise Valley town councilmember Paul Dembow has announced his run for re-election. We were hoping to be spared, for him to go quietly into the night to work on himself, to spend more time with his family, or whatever graceful bow-out he chose. But no…here we are again.

Dembow is now seeking his 4th term, which at this point seems to be little more than an exercise in narcissism. After all, with an unpaid position such as this, why would anyone want to cling onto it for such a long time? What more could one hope to accomplish if 12 years weren’t enough? If he truly has more that he wants to accomplish, isn’t that then an indictment of his ineffectuality and inability to get things done?

Even if you are the type of person who hates the idea of term limits, someone who sees a Congressman or woman in their office for 30 years and is not reviled, even 4 years in office is too much when it comes to the wrong person. And in our opinion Dembow has shown repeatedly that he simply does not have the temperament or decency to represent anyone except for himself.

How could we forget the infamous cross incident? When after his daughter tragically struck and killed a man with her car, she avoided any charges. But after the deceased’s family put a cross at the site of the tragedy, Dembow was caught on camera removing the cross. Furthermore, he lied to his constituency by insisting that it wasn’t him, only to be rebuked by the Scottsdale PD when they made it clear that anyone with two eyes could tell it was him.

One can only wonder what was going through his head at that time, but it was just a senseless display of pointless cruelty that it makes you wonder how he even got to a position of power in the first place. And then to double down by lying?

Added onto this are charges that Dembow called upon the Paradise Valley Town Attorney to investigate mean things said about him on social media. Sources say that information about that will be forthcoming, and this is speculation for right now. But if there is merit to the charge, utilizing town resources so wastefully and in such a petty manner should be a wake-up call to all of PV about his unsuitability for office.

Moreover, his close allyship and friendship to Mayor Jerry Bien-Willner will no doubt get closer scrutiny now. Candidates will certainly bring it up and it may well end up being an anvil around the mayor’s neck, with their association dragging him down as well.

We regret that we even have to bring these things up. We wish that Dembow would simply choose another line of work, or retirement. But instead he chooses to disgrace us with his presence, and as such it is critical that we make sure that PV voters know exactly who this man is: someone who is deeply unfit for office, and someone who must be voted against.