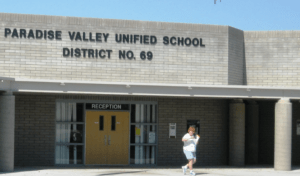 The pandemic uprooted many institutions, and while the various levels of government stepped up in an unprecedented way some entities got a little too comfortable with that financial support. The Paradise Valley Unified School District governing board showed their hand recently; that seemed to be precisely what happened with them this year, and they are now facing the consequences.

In a blockbuster of a story, the board recently had to explain to a packed audience of concerned parents why there was a $14 million shortfall for the upcoming school year and how they would whittle away at it. Apparently this resulted from an inability to effectively plan for a time without COVID-related government assistance; more damning was the fact that this assistance came from the state government, not the federal largesse, and as such a reasonable person should have assumed that it would not last longer than it was absolutely needed.

So far the proposed resolutions for bring the budget into compliance involve cutting days off of employees’ time, but even then they estimate that that will only carve around $4 million from the deficit. Other proposed solutions tend to be a bit more controversial, such as cutting back on social emotional learning and various behavioral specialists.

Could this happen elsewhere? It’s certainly possible, but this seems to be more the result of an egregious oversight and poor planning. This is even more shocking considering that the board is composed of some experienced and intelligent people, and we would certainly expect more out of them. At the risk of sounding like we are relying on old political stereotypes, this seems to be the sort of trap that more liberal school districts would fall into, with the expectation of additional funding opening the door for various pet projects (ones that may assist with re-election) and the hope that things will work themselves out afterward.

Considering the recent election, it would not be hard to believe that this scenario could have happened elsewhere. While we cannot expect that from more conservative districts who at least tout the virtue of living within their financial means, re-election prospects have a way of changing people. That said, this scenario again shows the merit of keeping up-to-date on what’s going on in your local government. If more people asked more questions sooner rather than after it became an issue, perhaps this could have been avoided.