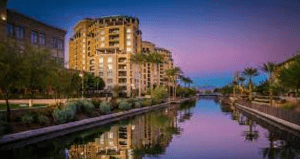 The fight for reasonable regulation of short-term rentals (STRs) has seemed to ebb and flow. First the state squashed local control, and then after serious backlash they relented some. While cities and towns started to implement regulations, the Arizona League of Cities and Towns seemed to side with the STR industry (you can follow the entire back and forth here).

While reasonable regulations are good, they only matter if they are enforced, so what’s been happening in Scottsdale recently is a bit concerning.

As we see in this recent story, less than 20% of STR listings in Scottsdale have gotten a license, one of the requirements in Scottsdale’s recent push to tamp down on the industry. While some of it may be a factor of out-of-state homeowners being late to respond, it does have the feeling of an expectation of little enforcement.

After all, the penalty is at least $1,000 per month for non-compliance with this rule. Meanwhile, there are STRs that list for over $1,000 per DAY as their rental price. While it would be in their best interest to be compliant, it clearly will be relatively low priority in the absence of strong sanctions for non-compliance, especially as preparations for the Super Bowl begin.

In all fairness, the STR operators are at least giving lip service to these new requirements and are sending letters to the property owners reminding them of that necessity. That said, it’s unrealistic to expect them to consistently hound them to do so, and direct financial consequences against them for non-compliance of the property owners seems as though they would be litigated into oblivion.

The next few months will be crucial with regards to how the city reacts. If there is little more than bills stacking up with no more teeth to it, perhaps the lesson will never be learned. That said, if those unpaid bills turn into something similar to unpaid property taxes where a lien could be put on the property, that would be something truly consequential.

We can’t be sure how the city will respond, but we hope that they are not passive about it. If an example or two needs to be made, the time to do so will be over the next few months.