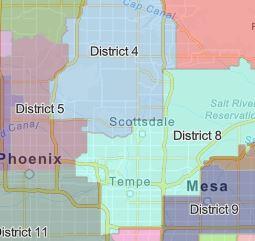 At the time of writing this on Sunday night, not every race is completely certain at this point. One thing that is for certain however is that the best case scenario for Republicans did not work out, and we see that playing out in some of the Scottsdale area races rather prominently.

As a reminder, the city of Scottsdale is covered within three different legislative districts: district 8, which is heavily Democratic and encompasses the southern end of the city, slightly right-leaning district 4, which covers Paradise Valley along with parts of central Phoenix, and heavily-Republican district 3, which covers central and northern Scottsdale. You can find our preview of these races here.

Some races turned out precisely how we imagined. For instance, we were confident that John Kavanagh would have no issues in the district 3 Senate race, and he is currently up 63% to 37% over Democrat Thomas Dugger. Juan Mendez, the Democrat in the district 8 Senate race, holds nearly the exact same margin of victory over Republican Roxana Holzapfel.

In those same two districts, the House races were similarly uninteresting. More so was in district 3, where Republicans Joseph Chaplik and Alexander Kolodin had no Democratic challenger for either of the two seats. While there was a Republican “single shot” challenger in the district 8 House races, Caden Darrow was no match for Democrats Melody Hernandez and Athena Salman.

One thing we learned however is that District 4 is indeed a legitimate swing district. Even though it holds a small Republican voter registration, in the battle between incumbent Senators, Democrat Christine Marsh is currently ahead by 2,262 votes (51.0 to 49.0%) against Republican Nancy Barto. Barring a sharp turnaround (which could be possibly depending on the makeup of existing votes), it looks as though Marsh may head back to the Capitol. This would be considered at least a moderate surprise and a real win for Democrats.

In the district 4 House, Democrats used the “single shot” strategy of running one candidate for two seats, a method that the LD 28 Democrats in the same area perfected previously. They will indeed be successful again, with Democrat Laura Terech all but assured of heading to the legislature along with Republican Matt Gress. Former Republican legislator Maria Syms sits 2.24% (or nearly 5,750 votes) behind Terech for second place.

So what can we glean from all of this? It’s quite simple: central and north Scottsdale has stayed conservative and south Scottsdale has stayed (relatively) liberal. But Paradise Valley has remained within the political parameters of the former legislative district 28: truly purple. Get ready for another decade full of very, VERY expensive legislative races as both parts scratch and claw for the majority.