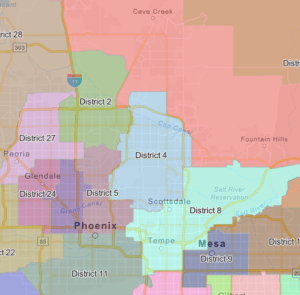 Due to the census every decade, all voters have the experience of being in an entirely new district, often with entirely new leaders and candidates from different areas; it often leads to an interesting mix of confusion as well as potentially exciting new options of potential representation. So what’s happened to Scottsdale at the district level, and how will it impact your representation?

As you can see, Scottsdale has almost entirely been cut into two new districts: District 8, which covers much of south Scottsdale, and District 4, which covers most of central and northern Scottsdale. District 8 is being lumped in with Tempe, and thus it will be a safe Democratic seat. With no competitive Democratic primary, your representation won’t change: Juan Mendez will return to the Senate, and Athena Salman and Melody Hernandez will return to the House. All three are Tempe-based, with Mendez and Salman a romantic couple who have caught flak for very rarely going to the Capitol. For you, “representation” will have to remain in quotes. Good luck.

District 4 offers up more interesting opportunities however, even if the general election will likely be boring. The district does lean significantly towards Republicans, and in a year that may be bad for all Democrats, it will be a truly uphill battle. In the Senate, there will be no primaries: the race will be between Republican Nancy Barto and Democrat Christine Porter Marsh. Barto has been a member of the legislature since 2013, previously in the northern Phoenix District 15. More of Marsh’s old district is in the new district than Barto, meaning Barto will have to introduce herself to new voters. That said, with a significant registration advantage, it probably won’t matter.

The House side is quite a different story however. The Democrats are employing the “single shot” strategy, running only one candidate (Laura Terech) for two seats and encouraging their base to only use one out of two votes. The Democrats had significant success with this strategy in the old LD28, where Terech came from, and it provides their only change to steal a seat with a registration disadvantage. With the old LD28 machinery, this could be very plausible, but redistricting has led to that machine spread across different districts, making this feat much more difficult.

The Republican side will have myriad options which will no doubt lead to an interesting primary. John Arnold, Kenneth Bowers Jr.,Vera Gebran, Matt Gress, Jana Jackson, and Maria Syms have all made the primary ballot. For those of you grappling with the new names, there are a few ones of importance. Maria Syms was a former Representative in the old LD28, whose claim to fame was a very public battle with the former AZ Republican Party Chairman, along with charges that Mark Syms attempted to run for the AZ Senate to hurt incumbent Kate Brophy McGee. Matt Gress is a former budget director for Governor Ducey, likely helping him with a strong fundraising base. Jana Jackson is a bit of a perennial candidate, but one with a reasonable amount of support and now campaign experience, which may help her slip through.

One negative side of redistricting however is that the campaign finance portal has not been properly adjusted yet, so retrieving campaign finance updates on these candidates is problematic. However, unlike the old LD28 which many of these candidates came from, since this will not be a battleground district, it is likely safe to say that hundreds and hundreds of thousands of dollars won’t be needed to win, and statewide fundraising apparati likely will not focus extensive resources here.

We hope that Scottsdalians do their research, as there are certain to be new faces representing them, not just next year but perhaps through much of the rest of the decade. Take some time and get to know these candidates, because three of them will be your voice at the Capitol for a while.