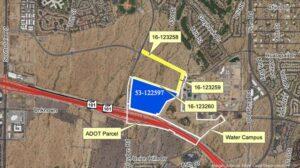 We don’t typically focus too much on business moves on this blog, as there is so much in the local space of politics and culture. Besides, corporate battles rarely become public or are blatantly obvious in the public eye at the local level.

Every once in a while, a move comes by that is such an undeniable power move to our community that it demands mentioning though. This particular move had all the hallmarks of Shaquille (or “Shaqtus”) O’Neil posted up in the paint and swatting an opponent’s attempt at a lay-up into the third row of attendees however. Enter HonorHealth.

Banner Health had intended to purchase a plot of land in north Scottsdale near Loop 101 and Hayden as a location to place a hospital. As the 800 lb gorilla of the non-profit hospital industry in the southwest, with nearly $8 billion in annual revenue and over 50,000 employees (and strong local ties, seeing as how they’re headquartered in Phoenix), it seemed like a slam dunk for them to enter the Scottsdale market with their first hospital there.

HonorHealth said “Not so fast” however; it had territory to protect! After all, with numerous facilities in the city, they did not want to give up their turf so easily, so what followed was a legitimate bidding war for the parcel of state land.  The CEO of HonorHealth just kept pushing the price up until the CFO of Banner said “No mas” and gave up, leaving HonorHealth with an extremely highly priced plot of land that will likely yield a questionable ROI but with turf intact.

Considering the status of Scottsdale as being a premier place to retire, having a dominant position in this particular market in this particular city is of serious value. And ultimately, there is the old school bully mentality that nearly everyone’s parents told them at some point in time as children: if you don’t stand up to the bully, they’ll keep pushing you around.

Rarely has corporate strategy come into the forefront in such an obvious and delightfully intriguing way such as a public auction, and even more rarely does it impact our little slice of heaven like this will. We only wish we could have seen it in person. Congratulations to HonorHealth; you may have overpaid, but you made an important statement in the process.