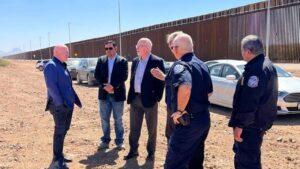 It’s late August in an even-numbered year, which in Arizona can also be known as “pivot season”. Now that primaries are out of the way, winning candidates will traditionally move towards the political center to appeal to those across the aisle. Blake Masters celebrated this holiday as ostentatiously as the person on your street whose Christmas lights keep you up at night; he is apparently sprinting straight towards the middle.

What about his general election opponent Senator Mark Kelly? He had the good fortune of not having a primary opponent, so he was able to save sums of money. That said, that hasn’t stopped his attempted sprint towards the political center. In this case, it’s for the sake of the one topic that is evergreen in Arizona: border security.

You see, as you are likely aware, Democrats voted against Trump’s border wall in 2020 citing a wasteful use of public funds. Mark Kelly voted to defund the border wall and criticized the Trump Administration for using military funds toward the wall, but life moves at you quickly in election season, and now he is spending his time attempting to fill in the gaps of the wall in Arizona.

Kelly toured Yuma last week and reportedly has been pushing the Biden administration to plug the wall’s holes via the Department of Homeland Security, and is talking up the importance of Border Patrol and the need to make their jobs easier. He must finally be paying attention to every single Arizona poll showing that border security is still a top subject. How decidedly unprogressive of him!

So will anyone believe him? That’s tough to say. Mark Kelly has generally walked a middle ground of not ticking off progressives like Kyrsten Sinema, but not actively touting more progressive policies that would make him an unnecessary lightning rod for Republican criticism. That likely makes him able to more easily pivot. The GOP is clearly somewhat concerned as this blog post implies.

Blake Masters might be a bit of a blank slate politically so political pivots might not be as stark and obvious. Not Mark Kelly; he went from being highly critical of the border wall to now trying to finish it up. He had his chance to champion the wall already and failed. Are we supposed to believe that he’s truly changed his mind, or just that it’s an election year and he’s in a very difficult position?