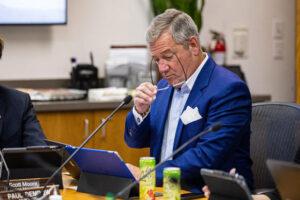 It shouldn’t come as a big surprise to regular readers that we are not particularly big fans of Paradise Valley Councilman Paul Dembow. From the unconscionable action of stealing a cross from a grieving family, to his entirely unnecessary decision to run for a 4th term, to general issues with demeanor and charges of improper dealings, we believe that he has done plenty to warrant being voted out. We just wished that the justice system worked with as much decisiveness in his case.

It would seem as though the case still has not been filed in the courts. It was originally pushed out to the Scottsdale judicial system for review. However, a potential conflict of interest involving the city attorney and the family that erected the cross caused them to push the case back to the Paradise Valley Town Attorney.

The PV Town Attorney’s office then turned jurisdiction of this case over to the Phoenix Municipal Court. And yet, court charges have not been officially filed, as per court officials. Confirmation was received of the transfer on February 7th, but two weeks later nothing has been done with it apparently.

Why is that? We have nothing but pure speculation; staffing shortages? General bureaucracy? Purposeful slow-rolling? We have no idea. We would like to think that a professional organization like the Phoenix Municipal Court would work more efficiently than this however.

In the meantime, Paul Dembow gets to avoid the embarrassment of official charges being brought forward. His serious misgivings are left to float in a quiet ether in the midst of a re-election campaign. Quite fortuitous for him.

We’ve already hammered home how inadequate Paul Dembow is for public office. We see no reason for such a privileged politician to continue to be protected. An official charge and court proceedings to bring some of his misgivings to light would be a great way to demonstrate his inadequacy to voters. While we try to be relatively unbiased in our commentary on local politics, in this case we hope that the Phoenix Municipal Court gets their act together and presses these issues. Dembow has earned it.