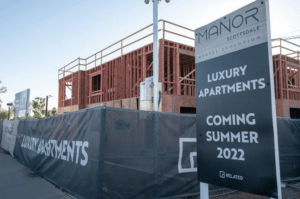 You must know by now that APG has been on the forefront of calling out the problem of affordability as it pertains to rent prices. We have spoken about it here and here, and while raising interest rates may cool it down eventually, there are no immediate signs of the problem abating.

While in this case, we hate to be right, we now have even more evidence of the affordability crisis in Scottsdale. A recent study was presented to the Scottsdale City Council outlining just how bad things are, with a housing shortage that is worse than feared and worse than the anti-growth candidates for Council keep claiming. It is worth noting that the study was commissioned by a pro-development group, Home Arizona, but that doesn’t make it less pertinent or less correct.

Amongst the findings? Scottsdale is the only city in metro Phoenix where a law enforcement officer cannot afford anything more than a one bedroom apartment, and firefighters and teachers are entirely priced out. Most striking is that according to the study, accommodations were within reach for all of the industry workers that they cite, yet in only two years the situation has deteriorated to a degree that nearly all of them are mostly or entirely priced out of living where they work.

One can’t help think of the ancillary impacts; how many people are going to want to work in Scottsdale if they need to commute 40 minutes in each direction to work there? It is essentially a worker shortage waiting to happen, leading to wage hikes to incentivize anyone to work there. It is an inflationary microburst waiting to happen, which will have an impact on all Scottsdalians.

The study states that someone would need to make $20,000 more a year to afford the same sized place compared to two years ago. Meanwhile, firefighters and teachers have received about $4,000 in salary increases during that time. It doesn’t take a mathematician to realize that those numbers won’t add up.

The more growth-resistant members of Council to bring up salient points of water shortages and whether or not the area can afford to grow. However, more multifamily units in Scottsdale don’t mean that more Californians will move to the area, just that a worker who had to commute a long distance previously no longer has to, which leads to open housing in their previous location, thus helping lower costs in that city as well.

Will Council get the point? Based on the statements of response to this study, it doesn’t seem like it. We wonder aloud how bad things will have to get for them to truly change their ways. Perhaps it will take votes at the polls to truly change the direction we take and to resolve this issue.