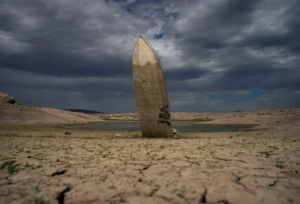 Regular readers know that the Arizona Progress Gazette has been screaming about the incoming water crisis from the rooftops. It began as volunteer requests for water reduction, which were not insignificant in impact, but nowhere near enough. As the Colorado River suffers another light year of melted snowpack, the crisis has recently escalated.

In a recent blockbuster announcement with significant ramifications, the state of Arizona will lose 21% of its normal allocation of water from Lake Mead/the Colorado River starting next year. The 21% represents by far the largest loss of water compared to any other state and Arizona. California will not see any reduction whatsoever as a result of the original agreement formed that placed Arizona in a subordinate role in the chain of preference.

These cuts are not just necessary because of the traditional need of water for drinking, bathing, farming etc, but also for the Hoover Dam and any hydroelectric power production. The water level is veering towards a “dead pool” status, where power production for much of Las Vegas and Arizona will be negatively impacted (if not effectively killed completely) due to the absence of enough water to get the turbines moving.

So what does it mean for Arizonans? At this point, thankfully it shouldn’t be a big impact for most of us. It currently impacts those who receive water from the Central Arizona Project. Unfortunately for Scottsdale, two-thirds of our water comes from CAP While there haven’t been specific directives as of the time of writing, clearly there will need to be some difficult decisions.

For instance, golf courses are a significant use of water resources in the city of Scottsdale, and while much of that water comes from groundwater sources, that makes up less than half of water usage for golf courses statewide. As the conversation begins to intensify on where cuts happen, there may be significant public pressure to reduce usage on what may be seen as a luxury. It is a “luxury” that Scottsdale is dependent on for tourism however, as a national destination spot for golf.

Ultimately, if the drought reverses and we have several good years of snowpack and rain, these cuts could be reversed. But the federal government has already signaled that this could be the beginning and that more cuts may be forthcoming if the drought persists. If that is the case, it provides an extremely uncertain future for not just the city of Scottsdale, but also all of Arizona.