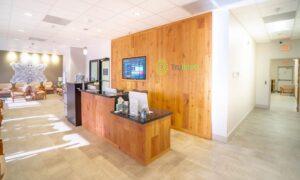 Roosevelt Row has long been one of the cooler spots in the Valley. Between First Fridays, a great walkable feel, and plenty of fun bars and restaurants, the area right on the northern tip of downtown Phoenix is a great intra-county destination for a night out. But it has always been missing one thing…until now.

The first marijuana dispensary will be setting up shop on the Row, as Trulieve Cannabis moved into the area on August 2nd. The woman-led business has had stores all across Arizona from Cottonwood to Lake Havasu. As for why no dispensaries had already set up shop in such a high foot-traffic area is a bit of a mystery, but many tenants have complained about very high rent prices, which may have played a significant role.

The small businesses that gave Roosevelt Row such a unique feel have largely been pushed out of the area as a result of those rents. Even Bliss ReBar, the very popular bar in the Row, recently announced that it would be vacating the area due to an inability to negotiate favorable terms on their lease.

Therefore, a dispensary couldn’t have come at a better time for an area that is at risk of losing out on revenue to other areas. For example, the Grand Avenue scene just a couple miles away has come up in popularity with plenty of local art, bars and restaurants, and a generally cool vibe. It has become an upstart Roosevelt Row and has eaten into their popularity amongst some Phoenicians.

Roosevelt Row has long been a great pseudo-hidden jewel in Arizona, but one that has fallen on slightly hard times due to a higher cost of living. While we might otherwise be inclined to make a pot joke out of “higher rents”, we will avoid it, and instead offer appreciation for this move. With such a great location and great walkability, the Row has a ton to offer and its continued success bodes well for all of us. This is a good step in the right direction.