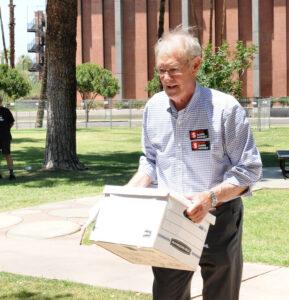 It would be easy to question the motives of people who continue in politics are repeated losses or other disappointments. When it comes to candidates, it’s easy to look at figures like Rodney Glassman and think it a joke. But when it comes to causes, it is hard to see anything other than good motives mixed with a whole lot of determination in the face of long odds like the attempt to stop “dark money” in Arizona.

Leading the way from the very start has been Terry Goddard, who likely needs no introduction for most of our readers. For those who are less aware however, Goddard was the youngest Mayor in Phoenix’s history in the 1980’s and served two terms as the state Attorney General at the start of the millennium before unsuccessful runs for Governor in 2010 and Secretary of State in 2014, both of which were very negative years for Democrats in Arizona (as well as much of the country).

However his legacy is no longer defined by those two losses but instead his dogged determination to mount initiatives to demand further transparency in elections spending, more specifically for the donors to independent expenditure groups that are able to dodge being uncovered by campaign finance laws. In both 2018 and 2020, Goddard’s Outlaw Dirty Money initiatives faced the buzzsaws of first the Ducey-packed Supreme Court (they tossed it off the ballot) and then COVID (they weren’t able to secure enough signatures).

Undeterred from such obstacles, Goddard tried again this year, with the benefit of two recent attempts and everything that was learning. The results was the Voters’ Right to Know Act, and Goddard must have learned some important lessons, but another significant addition to the cause was highly successful and respected Arizona businessman David Tedesco, whose seal of approval added extra gravitas and credentials. As a result, this time around they successfully navigated the gauntlet. The initiative gathered enough signatures, pacified the state Supreme Court, and will be put to the voters this fall.

Many people have dogged determination in politics when it will positively impact them. Lobbying to get laws changed, focusing on getting politicians they are financially friendly with elected, or purely the pursuit of power paired with an outsized ego. Not Goddard though, it is essentially impossible to see any monetary benefit for Goddard. He is the sort of public servant who actually attempts to do the right thing, sometimes a long gone concept.

Mind you, getting an initiative on the ballot is one hell of an undertaking. It needs hundreds of thousands of valid signatures from voters, orders of magnitude more than candidates. That takes an army of volunteers, $7 figures of cash in the account, or both. This is not running for a school board race, this is an incredible amount of time and effort. To have now done in the face of the power structures of this state three times is meaningful…it is courage.

And Goddard is now within months of perhaps his most meaningful work potentially coming to fruition. The third time was the charm when it came to getting it to the voters, and now the voters will finally be able to decide. Polling for these sorts of issues demonstrate support, so its outlook is rosy. We’re on the precipice of real, positive change, and we will owe it all to one man who simply wouldn’t accept failure and who wouldn’t give up.