This Battle Royale has everything: drag queens, donations to Obama, prosciutto, skipped debates… 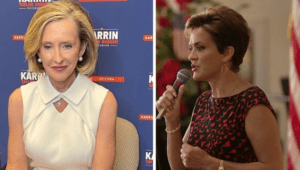 As you almost certainly know by now, Arizona Governor Doug Ducey has been term limited and cannot run for another term. As such we will be electing a new Governor, allowing Ducey time to figure out a way to become Vice President regardless of who is elected President in 2024. And in a time when the pain at the pump, the grocery store, and dang near everywhere is salient and unavoidable, it would normally be a ripe moment in time for Arizona Republicans to push Democrats back into the hole of irrelevancy that they have risen out of from the last few election cycles.

But then…abortion and the Supreme Court. And everything changed…maybe. A Red Wave is now being reconsidered, and no other single elected positions are as important to the execution or non-execution of this single issue as the Governor. So now…we’ve got a ball game!

Let’s consider the less messy side of this race; the Democratic primary. It started as a three-person race, with Secretary of State Katie Hobbs taking a leap of faith by vacating that seat and running for Governor after one term, and with former Nogales Mayor Marco Lopez and former state legislator Aaron Liebermann rounding out the trio.

Hobbs was always the front-runner for obvious reasons: she had already won statewide office. Liebermann’s entry into the race never made any sense; while he showed himself to be a very prolific fundraiser in his runs for the state House, with only one-and-a-half two year terms under his belt, absolutely no one was clamoring for him as Governor. It seemed to be purely an exercise in hubris and ego. His campaign video depicted him with a dumpster fire; with a thorough lack of support he bowed out of the race early, with the dumpster fire ad being a solid depiction of his campaign.

Marco Lopez always seemed to be an intriguing choice; a border town Mayor, young and very intelligent (a Latino Pete Buttigieg of sorts), and having a relationship with Mexican telecom kingpin Carlos Slim, once the wealthiest man in the world. It had all the makings of an interesting upstart campaign. That said, the campaign never seemed to get off the ground, cycling through campaign managers early and never seeming to properly get the word out.

That is not to say that Hobbs has run a great campaign herself. Previous charges of racial bias from a former Arizona Democratic staffer under her purview, Talonya Adams, led to millions in settlements. Hobbs and her team have responded by not having her attend any Democratic forums or events, culminating in her ignoring the request to debate on PBS, thus ensuring that she will not debate at all this primary. While the strategy is clear (when you’re ahead by a lot, simply avoid mess-ups and put on the cruise control), many rank-and-file Dems are grumbling and displeased. Considering the Roe v. Wade reversal, this could have been a golden time for her to talk to and energize her base. Her floating like a butterfly but not stinging like a bee is ultra-safe, at best…counterproductive and weak at worst. She will win the primary, but won’t be properly tested.

And now onto the Republican side: you’ve likely seen the ads, the fights, the whole nine. This is a two person race with two also-rans, since Matt Salmon dropped out of the race. Since the also-rans deserve some love, we will start with Paola Tulliani Zen, who goes by “Z” in a thinly disguised attempt to ride the “Q” wave. She grew a cookie company into a decent fortune and lended her campaign over a million dollars but doesn’t seem to be in a hurry to spend too much. Her highlights are incredible political photos and a campaign video focused on prosciutto. Also, there is Scott Neely, a self-professed everyday guy whose claim to fame now comes from the PBS Republican candidate debate, where he said that there were more women in that room (three) than any other room he’s been in. Quite the flex, Scott…nice work.

Now onto the front-runners, Kari Lake and Karrin Taylor-Robson. You no doubt have been inundated with information about the former and ads from the latter, so I won’t go into too much detail. However, the defining characteristics of Lake’s campaign has been Trumpian bombast and antagonism against traditional media (even Fox News). Her fundraising has been extremely tepid for a front-runner, with $700K Cash on Hand (CoH) as of the Q1 reports. While she clearly energizes the Trump base, her recent past as a Democrat and an Obama supporter has been used against her. Additionally, the “October Surprise” of having been very chummy with a professional drag queen, in this day and age of drag queens being synonymous with child grooming in conservative circles, is the more recent scandal that may chew into her numbers.

On the other side is Taylor-Robson, who between prolific fundraising and being the wife of a billionaire developer has had a metric ton of cash to work with, and had spent over $6 million already as per the Q1 reports. She has all the hallmarks of a traditional, older school Republican (much in the vein of Governor Ducey) who is trying hard to cosplay as a hardcore conservative. She did receive the last minute endorsement of Matt Salmon, which may be worth a few percentage points of a bump. She has consistently been trailing Lake in the polls, but between Salmon’s help and Drag-gate, as well as essentially an unending source of funding, this race will very likely be very close at the end. However, we will call…Lake by a nose.

Now, the general. Hobbs’s team will likely regret not having her debate at all if it is her against Lake. Hobbs has always been slightly awkward in contentious situations, and pitting her against the most media-experienced candidate in Arizona history, one who knows to bring a gun to a knife fight? It will be ugly. Lake will eat her alive. Roe v. Wade is obviously a big potential catalyst, one where the battle lines are very clearly drawn between the two, but the economy is also a huge overhang, which obviously favors Lake. Lake’s tepid fundraising would hurt, but at the possibility of losing the seat, some spigots will be turned on (even if the Ducey-influenced RGA might not be as helpful as they would be with Robson). But when a Latino shift is a strong possibility, and the fact that this is still Arizona…it certainly feels like Kari Lake will be our next Governor.

And next week, the final episode of The Breakdown: does Arizona send Mark Kelly back to the Senate?