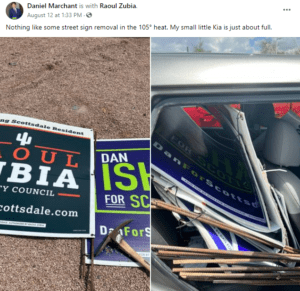 Political street signs are one of the most prevalent forms of political advertising, and simultaneously one of the most obnoxious. For half a year every high-traffic corner in the county turns into an arms race to see who can get the best placement, and as a result as many as a dozen signs crowd out every free square foot of space.

But now that the first 2022 election is done and gone with many candidates having been defeated (or some assured a win), why do so many campaigns keep their signs up? Hypothetically, over half of campaign signs should be gone. It never works that way.

Year after year however, we see signs up long past this deadline. And to be fair, this is understandable; after pouring your life into an endeavor and it doesn’t go your way, the last thing you want to do is work that reminds you of this loss. It is much easier to go on a vacation, pout, or simply move on with your life. Unwinding a campaign is always much less a priority than getting one moving.

That said, we are constantly disappointed by the lack of responsibility. A couple major offenders in the Scottsdale and Paradise Valley area are Rodney Glassman and Jerry Bien-Willner. Glassman likely has a ton of signs around the state, which obviously complicates things, but considering that he has run for office at least 700 times (/sarcasm) he should be ready for this. For the re-elected Mayor of PV, his territory is very small, and this task could be easily knocked out in one weekend.

This is essentially littering our environment and not enough campaigns are called out on it. So we will do so: candidates, please pick up your signs this week. Scottsdale should only have two City Council candidate signs up, PV should have none, and there are plenty of statewide and legislative candidates who should clear their litter. This is the week…do it!

And since we want to give credit where it’s due. It looks like Raoul Zubia and Dan Isha got the message early and did the right thing by clearing their signs. We can only hope that this offers some positive peer pressure.