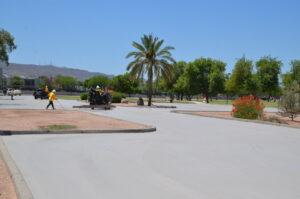 Let’s be honest: in the midst of worsening climate change, Maricopa County might not be the ideal place to be. We have spoken at length about the worsening water crisis perpetuated by the current megadrought; combine that with the fact that 110 degree days in the summer are already difficult enough, and it starts to turn into an existential crisis of livability in the area. Thankfully, Scottsdale is not waiting until things get worse before taking action.

The city (as well as the city of Phoenix) partnered with Arizona State University to perform a study regarding how to cool temperatures via light colored asphalt. They had three desired outcomes and nearly 30 specific strategies that they are considering to help hit those goals. The initial results have been incredibly positive, with a 10 to 15 degree reduction in average temperatures.

While the strategies to be employed include other tactics such as increasing tree canopies and shade, the lighter color has been employed elsewhere with positive benefits. Dark colors (such as that of traditional asphalt) absorb the sun’s radiation, which not only leads to increased heat during the day, but a drawn out process of the release of that heat through the evening. Light colors reflect that heat.

There are drawbacks to this strategy, specifically in drivable pavement. After all, as long as tires are black, hard braking will eventually turn a light colored road dark with dark tire residue. However, for walkable areas, done in conjunction with increased shading via canopy trees can help not just preserve Scottsdale’s walkability and livability, but even improve it in the face of climate change.

If this seems like a complete moon shot out of nowhere, we assure you that it is not. It has been tried by numerous other municipalities, including our best sister to the west, Los Angeles. They started doing this in 2015, so we have a reasonable template to work from and lessons that we can learn from them, instead of the hard way.

With declining water supplies and a warming state, we fear that the best days of Scottsdale may be behind us in a way that we can’t truly reverse. However, with ingenuity and creativity, we can at least extend these good days for much longer, and it will take ideas like this to get it done. This feels like a great step in the right direction, and we applaud it.