Over the past year the goings on with the former Chinese Cultural Center near Phoenix’s Sky Harbor Airport have been parts amusing, sickening, surprising and confounding.
And there’s a new wrinkle we’ll get to in a moment.  We’ve written on the issue before but here’s a quick refresher.
A development arm of the Chinese government sold the failed center to a real estate company back east several years ago.  It was sold without any stipulations to preserve anything on site.
After a short time the second owner put the center up for sale again, and it was finally purchased by a Phoenix-based technology and private equity company.  That company, True North and its subsidiary 668 North, LLC, did so to create a new corporate headquarters in Phoenix.  The companies expansively offered to preserve numerous elements on-site and off-site.
But that wasn’t enough for some in the Chinese-American community.  Members somewhat bizarrely tried to intrude on clear private property rights.  Many lawsuits were filed and nearly all have been lost.  They even hired a convicted felon named Tom Simon to strangely serve as their mouthpiece.  During the course of his representation Simon was arrested for purported, horrific treatment of a Chinese American woman, which we opined about previously. Here is a link.
Along the way members of the Chinese American community wanted a chance to buy the property even though it was someone else’s.  But when given the chance by current owners they failed to put up any credible funds to proceed. 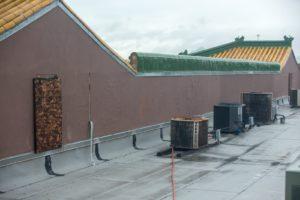 It’s fair to say that after a year of objections they continue to make noise, not sense.
Take the latest tidbit.
The Chinese American community, in its various forms, has gone through more lawyers during their quixotic quest than a State Bar convention.  They apparently intend to continue this trend.  One of the lawyers that has stuck by them, Jack Wilenchik may be in hot water for properly agreeing to let the owners repair the roof and its decorative tiles after significant rain damage from Hurricane Rosa.  Apparently, remaining opponents don’t understand roofs do leak, especially ones that are older and that use different techniques like the former Chinese Cultural Center.  The group’s displeasure with the extent of the repairs has been made known, even though they were supported by a court order and video and photographic evidence.  In other words there’s no doubt the roof was in bad shape and had to be fixed.  But logic has never been the group’s raison d’etre.
So, frustrated by their intrepid lawyer’s acquiescence they have been making calls to other law firms around town like Lewis & Roca and Gallagher & Kennedy, perhaps and presumably to replace Wilenchik.
We are no fans of Wilenchik but at least he deserves points and should be allowed to go down with the Titanic, after his failed ride.  If he is thrown overboard, it would be yet another example of the group’s ethos, which is almost as empty as the former Chinese Cultural Center was before it was sold.  Twice.