For weeks we have been sounding the alarm about Tom Simon. He’s the former spokesman for the failed effort to prevent the renovation of the former Chinese Cultural Center in Phoenix. Simon is also a felon with a criminal history that goes back decades. History repeated itself in July when he was busted by Scottsdale Police for unlawful imprisonment and threatening to distribute lewd images. Here is a link.
The story gets a lot worse. The Police report tells a troubling story. The victim claims Simon coerced her to have sex, secretly videoed the sex, and she claims Simon threatened to post the recording on the internet if she did not agree to have sex with him again. 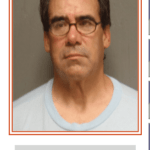 Simon was arrested on charges related to unlawful imprisonment and electronic distribution of lewd materials. Simon pled guilty to disturbing the peace and fighting. The other charges were dropped.
The police report is disturbing. While sexual assault WAS NOT alleged, the victim told police she was fearful and very upset. Police never did not find a video but they did find some disturbing text messages. The police report states the following:
“I noted a very extensive text conversation between XXX and Thomas. In these texts, Thomas claims to have video of them having sex. He also sends a picture of what he says to be the video of them having sex and further explicitly explains the two having sexual intercourse. He explains that he will release the video on the internet and that it would destroy her reputation. He also threatens to call immigration on XXX, get a restraining order against her and file criminal charges against her unless she meets up with him with the underlying tone of having sexual intercourse.”
We redacted the victim’s name.
The people opposing the renovation of the former Chinese Cultural Center in Phoenix had no choice but to fire him in light of these recent charges. Given his criminal past he should have never been hired in the first place.
Previously APG has noted Simon’s past felonies as evidence he can’t be trusted. These new allegations go well beyond questioning his credibility. They question the ethics of any organization that even considers hiring him as a spokesman and the sanity of any media outlet that accepts his statements as facts.