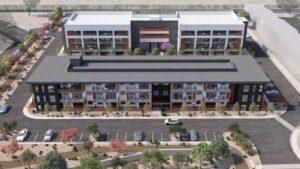 Regular readers of this blog have no doubt read about our disappointment over the lack of vision and forward-thinking regarding development. One frequent example that we have lamented about is the difficulty that the Ironwood 92 project has encountered as it attempts to make its way through the approval process. A fantastic project that has the unanimous support of the businesses around its proposed site; a site that currently houses an office building that has been a vacant eyesore for 12 years. An unequivocal upgrade over the present.

Well, wouldn’t you know, another valley city has become a north star for this sort of guidance: it’s Mesa, of all places.

In the case of 560 W Brown Road, long-vacant medical offices were an eyesore, and a developer came in wanting to turn it into beautiful housing, which turned into NIMBYs offering concerns of it turning into “low-income housing” and concerns about higher crime.

Does any of this ring a bell, Scottsdale? If not, I recommend listening in on a planning commission or city council meeting. You’ll hear much of the same pearl-clutching and gnashing of teeth.

However, because of the foresight and practicality of 60% of their city council, Mesa will soon have gorgeous apartments with major amenities, as well as some degree of rent relief for many people. And unless rent prices stabilize in a major way, which seems unlikely, this same process will play out throughout the valley. How many other cities are going to leave Scottsdale in the dust and recruit new residents and a larger tax base because of forward-thinking policies?