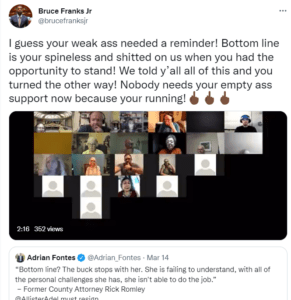 In her third run for elected office in the last four years, while Julie Gunnigle is now inching towards perennial candidate status, not unlike Rodney Glassman (sans party flipping), she has shown promise at times. Bold, well spoken and physically attractive (which unfortunately matters), she has positioned herself as someone worth watching in the Democratic political world.

However, the ability to get attention and become a darling on social media often does not translate to the ability to lead, and more specifically lead a large and nuanced department. Gunnigle’s 2nd run for County Attorney is now making that brutally obvious through the hire and continued employment of her campaign manager, a man named Bruce Franks Jr.

Who is Bruce Franks Jr.? Hailing from the St. Louis area, he originally gained some attention as a battle rapper, and then gained further prominence after winning a Missouri legislative seat in 2017. His stint was short-lived however, after he resigned to work on his “mental health” at the end of 2019, not soon after reports came out about an egregious misuse of campaign funds for everything from vet bills to a trip to a casino to simply checks written out to himself. He was fined nearly $15K by the state of Missouri which he is still (presumably) paying off. Nearly anyone who has spent a minute in politics knows that “mental health” was almost certainly a way to attempt to save face and to avoid being forcibly pushed out.

And what does any good grifter do when they know that the gig is up in their current locale? They find a new locale chock full of fresh suckers, and this is where the perfect storm aligned for Franks: a move to Arizona combined with the George Floyd murder.

Franks spent little time attempting to move to the top of the local protest scene soon thereafter, getting himself arrested after allegedly bum-rushing Phoenix police during a protest. While the scandal-plagued MCAO later dropped charges against him, that was after he attempted to sue them for $2.4 million. I’m sure you’re shocked by the fact that someone who used campaign donations for a trip to the casino would look for a big legal payday, but perhaps the even more important grift lay ahead.

Franks rode the Black Lives Matter and anti-MCAO wave into a role as the campaign manager for Gunnigle. As of the last campaign finance report (which is now dated), Franks has been the highest paid “consultant” for the campaign, pocketing $24K, and has directed all campaign printing services to his own print shop. To complicate things even further, he reportedly proposed to the Executive Director of the Maricopa County Democratic Party (and she reportedly accepted), sinking his talons deeper into the political scene and making ousting him even more complicated and ugly.

If the campaign was moving forward on all cylinders, that would be one thing. But Franks has been entirely too busy on Twitter reliving his battle rap days against all sorts of Democrats, including literally tagging and saying to Secretary of State candidate Adrian Fontes and former County Democratic chairman Steven Slugocki, “F*** him”. I would be hard pressed to insert more obvious red flags into a purely fictional story if I tried. 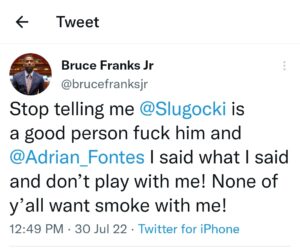 So Gunnigle is paying an incredible amount of money to someone with nearly no experience in our unique state, someone who was shoved out of office for bilking campaign funds, and who thinks it appropriate to pick fights with other Democrats publicly for no discernible reason. At some point you have to wonder how inappropriate Gunnigle would be to lead a large department when she chose such a walking nuclear dumpster fire to be the best paid and most important person in her campaign.

My sources now tell me that statewide Democratic candidates for office as well as Democrats running for the legislature in contested seats have been instructed not to appear in pictures with her. What started as a compelling, exciting campaign is now a cast-off, one being derided by neutral news sources, and one that is toxic to the touch. One choice completely derailed her campaign and has destroyed any chance of winning a difficult race.

So why did this happen? Likely because the activist community won out over rational and sober minds. That the desire for Twitter clout beat out any common sense and political orthodoxy. And as a result, Gunnigle has shown herself to be the wrong person to lead much of anything, and may find herself in the same space as Franks in 2 years: looking for the next state to attempt to fool with rhetoric entirely devoid of actual leadership capacity.