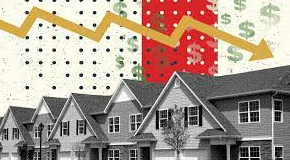 Anyone who checks Zillow or even reads the news at all is almost certainly aware of the incredible rise in housing prices since the pandemic, as work-from-home policies led to an exodus of people away from high-cost areas such as California towards lower-cost areas like Arizona. However, the impact of that is that Arizona can no longer be considered a low-cost area, as housing prices have skyrocketed.

Many have opined about the unsustainability of this phenomenon and have been openly wondering when it would reverse. Well it looks like we have an answer; it has already begun to reverse.

In what could only be described as prices cratering, imploding, or whichever hyperbolic verb you choose, home prices in the area just dropped 5% from the month before. This has followed a major spike in asking price changes as many sellers are now realizing the new reality: that they were just a little too late.

That said, it is worth noting that the median sales price is still $457,500, which is still very far above what it was pre-pandemic, so it raises a larger question: is this just the beginning? Will this resemble something closer to the ‘06 crash?

First, it’s important to differentiate how this is different. The last crash was built on overlending based on dodgy credit standards and adjustable rate mortgages in the years preceding. Credit standards and scores from homebuyers are significantly higher now compared to then.

However, one way that our current situation may be even worse is the amount of non-housing debt, such as credit cards and car loans. Current levels are nearly double what they were before the last housing crisis. In a rising interest rate environment, interest on credit cards and any non-fixed rate debt will rise. It might not take too much of a jobs recessions to begin a bit of a wave of bankruptcies, car repossessions, and perhaps forced selling of homes.

Additionally, the reports have been myriad on the looming water crisis in Arizona. Without a near term reversal of this trend, it is very easy to see how Arizona will be no longer seen as a great place to move to for many people, and how many may strive to leave and avoid those future consequences altogether. Fewer people moving in than moving out would obviously apply downward pressure to housing prices.

Considering how far prices ran up in the first place, there is quite a bit of room left to the downside, so thi is very likely just the beginning. Will we get the sort of housing bargains that were available around ‘09 and ‘10? Highly unlikely. But people who have been priced out of buying recently should feel a bit better, as 12 or 24 months from now will likely lead to some better buying opportunities.