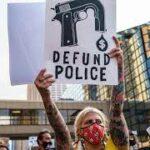 While the death of George Floyd did force America to confront the more extreme elements of policing, it did have some more negative repercussions, most prominently protests that turned destructive in a number of cities. One other less-than-deal repercussion was the beginning of the “defund the police” movement, where more extreme left-wing activists called for anything between a significant reduction in police spending to their disbanding completely.

This national movement did seem to gain traction, with city governments in blue cities stripping some funding from police departments. Amongst the bigger headline actions were a gun violence unit disbanded from the Portland police department, and large amounts diverted from the San Francisco police department to focus on retraining and mental health assistance. It is likely no coincidence that both cities have had major spikes in crime since then.

While Arizona typically is not beholden to pushes from the more leftist elements of society, it seemed for a while that the “defund the police” movement did build some traction locally. Thankfully however, that push seems to have lost out as the city of Phoenix announced their plans to use a significant budget surplus with an 8% increase in the Phoenix PD’s operating budget.

This initiative passed on a 6-1 vote. Oddly enough, the Councilmember who was most aligned with the progressive movement, Carlos Garcia, voted in favor of it. The only dissenting vote was from conservative Jim Waring, who complained that the funds weren’t used to increase the number of officers patrolling our street, so in all fairness it is fairly evident that this funding is not a panacea.

In a further positive sign, Mayor Kate Gallego, who resides firmly on the left of the political spectrum and herself an advocate for “police reform”, has stated that police retention is an issue that she takes seriously. Noted police advocate Sal DiCiccio calls it an issue of respect, that it is difficult to retain good officers when they are treated poorly by not just the people they are policing but also the leaders above them.

Phoenix is not just the 800 pound gorilla in the room that is Maricopa County due to its size, but as a majority-Democrat led city, it is safe to see it as having a leadership role within local left-leaning politics. It is a positive development that we are not having to deal with a lack of common sense in an 800 pound gorilla, and that smaller, more progressive cities (such as Tempe) now have some cover if they choose to enact more reasonable pro-law enforcement policies.

While law enforcement does have a history of imperfection, large scale defunding efforts have usually shown to have a detrimental effect on the societies they are tasked with attempting to police. We are pleased that Phoenix is rejecting those louder, more extreme voices and is showing leadership with sanity. We hope to never hear the terms “defund the police” by serious people again, and the focus can now turn to collaboration and implementing best practices instead.