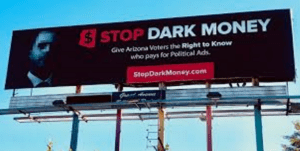 It may not be a stretch to say that Arizona is as divided as it ever has been. Many statewide races will likely go down to the wire and be very close to a 50/50 split, and rhetoric has heated up on both sides of the political aisle. But one subject is overwhelmingly popular, regardless of which side of the aisle you’re on: the desire to rid our politics of “dark money”.

For those who are unaware, “dark money” is spending from organizations looking to impact elections. They are considered “dark” because organizations under the 501(c)4 classification do not need to declare who is contributing to that organization, leaving the door open for individuals or businesses to tip the scales in their own favor without anyone being able to find out. However, the Terry Goddard-spreadheaded Right To Know Act (which will be on the ballot as Proposition 211), will fix this issue if it receives over 50% of the public vote in the November election.

A recent poll by David Binder Research of 800 likely Arizona voters showed an unprecedented degree of support: 87% of those polled expressed support after the initial question, with only 7% against it. Perhaps even more telling, when those voters were provided aggressive critiques of the proposition, 83% still voiced support.

Maybe the most impressive fact is that it seems as though this is the only issue to bring together all sides of the political spectrum. While 97% of Democrats supported it, a truly incredible number in its own right, so did 78% of Republicans and 86% of Independents. It also received over 80% support in every single Arizonan Congressional district, demonstrating not just cross-party support, but also support that bridges the urban-rural divide.

Sometimes it seems like the political right and left live in different worlds. Sometimes it seems like they would not agree on the color of the sky or what 1+1 equals. But regardless of your political stripes, it is now completely evident: we collectively agree that Dark Money has no place in our politics, that we will be better off without it, and that the Right To Know Act, or Proposition 211, is without question the best way to move our state forward.