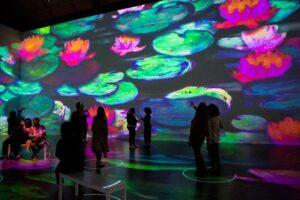 We all know that Scottsdale was a fairly wide array of different entertainment options, ranging from nightlife to sports to shopping and more. Most people wouldn’t have considered art to be a standard aspect of the Scottsdale experience, but perhaps that’s changing.

We spoke previously about the Immersive Van Gogh Experience, an experience dedicated to promoting the genius of Vincent Van Gogh, when it came to Scottsdale. Apparently it was such a success that the folks that put on that exhibit, Lighthouse, have decided to do it again in Scottsdale with Immersive Monet & the Impressionists. Along with Monet, the work of other noted Impressionists such as Auguste Renoir, Edgar Degas and Mary Cassatt will be featured.

Impressionism was an art form that started in the second half of the 1800s in France. Instead of focusing on clear and obvious depictions of subject matters, its use of unusual brush strokes and brighter colors were instead designed to provide an impression of the subject matter. It laid the framework for movements such as modernism.

Claude Monet was considered the founder of Impressionism, and focused on natural scenes, with his most well-known piece, “Water Lilies”, completed near the very end of his life. Renoir was known for his depiction of the excitement and beauty of French life. Degas did the same, with a particular focus on dance and body movement. Cassett was an American but spent much of her life in France and befriended Degas; her works were focused primarily on people and family.

The exhibit will start on July 29th at the Lighthouse ArtSpace at 4301 N Scottsdale Rd. Since they started with Van Gogh (a Post-Impressionist) and moved backwards in time, subsequent exhibits may continue to go further back in time. We hope it moves forward to the artists influenced by Impressionism though, namely Picasso and Dali. Now THOSE would be compelling immersive experiences!