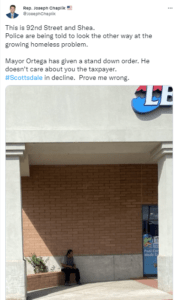 I certainly understand the strategy; be as loud as you can, take risks with specious allegations, and attempt to become a darling of your political party. Joseph Chaplik has gone all in on this approach during his young political career as a two-term state Representative, and could prove to be even more successful if his ambition to become Speaker of the House comes to fruition. It’s just a shame that it’s so inherently embarrassing.

The most recent example of this came on Twitter last week (because of course it happened on the world’s collective cesspool). Chaplik posted a picture of a man sitting in the shade near a grocery store. In this innocuous-appearing picture, Chaplik 1) implies that it is evidence of a growing homeless problem, 2) states that Scottsdale Mayor Dave Ortega gave the police a “stand down” order regarding homelessness, and 3) states that as a result, he doesn’t care about you, the taxpayer.

So much to pick apart in this political Rorschach. Pretty much any sane non-sociopath would see a guy (perhaps down on his luck, perhaps not that much) trying to get out of the sun for a little while…you know, because it’s August in Arizona. But not Chaplik, he has to attempt to make some political hit job from the most benign of situations. Strong sociopath vibes.

And what did it get him? Well, it got a response tweet directly from the Scottsdale PD, saying that there was no such “stand down” order at all. As a Republican you have to work pretty hard to get the police to publicly clap back at you, but Chaplik is a certain kind of special.

Additionally, what came next was either the strongest and fastest rapid response I’ve ever seen, an ace in the hole quickly deployed, or perfect coincidence. Just about an hour later, this op-ed from Mayor Ortega was released, calling for a full funding of the Scottsdale PD. Lucky, good, or both, the timing couldn’t have possibly been more perfect.

The last few years have caused a chasm between the political parties regarding their views on law enforcement, with Republicans being strongly pro-law enforcement and Democrats ranging from guarded and cautious in their views all the way to hostile towards law enforcement. But here is potentially the next Speaker of the House in Arizona who seems dead set on reversing that and putting a ball on the tee for former Democrat Ortega for him to knock it out of the park.

Hopefully the AZ GOP will quickly realize that Chaplik is far too foolish, impetuous, and craven for attention to be anything but a back-bench legislator. In the meantime, they should hope that he takes his shots much more carefully.