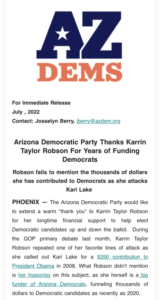 I really wish I didn’t feel the need to talk about how the Arizona Democrats seem to be doing everything in their power to fail. The thought of GOP majorities and Kari Lake as Governor is not exactly a fun thought. I had hoped that after the Pima County Democratic Party’s abject failure to engage anyone near the political middle, their more mature parent would step in and show the way.

Silly me! That was clearly a ridiculous wish on my part.

The Arizona Democratic Party insisted on telling the Pima County Dems to hold their beer; they sent out an email to an unknown number of recipients (but seemingly including Jeremy Duda, noted local reporter now working with Axios Phoenix). In this, they praise Karrin Taylor-Robson for her significant donations to Dems in the past, including serving as a “bundler” (someone who brings together donations from wealthy donors to a single campaign or cause) for Democrats.

Why would they do this? Because they want that information to get out widely, so Republican primary voters move towards Kari Lake; Dems believe that she would be easier to defeat in the general election than Taylor-Robson.

And while I agree that Lake probably would be easier to defeat than Taylor-Robson, this is Arizona, and we’re staring down the barrel of a potentially bad year for Democrats up and down the ballot. Both of them would be favorites against the presumptive Dem nominee, Katie Hobbs. And while some Dems may find some comfort in a relatively sane KT-R administration (albeit one that is much further right than they would like), no one on the left seems to be the slightest bit comfortable with the idea of a Lake administration.

Rooting for the worst choice assuming they’d be easiest to beat…I’ve seen this. We’ve all seen this; when Democrats openly rooted for Donald Trump to win the Republican primary believing that he’d be a cakewalk in the general election. Yeah, that worked out swimmingly.

So the strategy was either to promote a truly unpalatable candidate in a year when many things will go against Democrats, or if KT-R is indeed the candidate, you’re telling your own base that she likes a lot of the same people as you do. Maybe she’s not so bad…

It seems pretty evident that the AZ Dems thought that they were playing 3D chess here, it’s just that everyone else sees that those “chess pieces” are black and red disks. I’m sorry, my fellow Arizona liberals; you deserve a heck of a lot better.