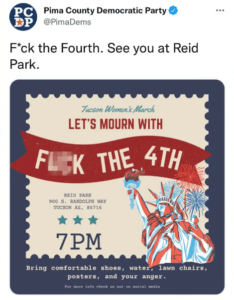 As a card-carrying liberal, I have become well accustomed to Democrats snatching defeat from the jaws of victory, nearly as predictably as a late-season Kliff Kingsbury collapse. Even then, in the midst of an extremely tenuous economy led by rampant inflation, I felt a ray of potential hope with the overturning of Roe v. Wade. While I strongly disagreed with the action, I figured that this might be the catalyst to energize Democrats and perhaps stave off a red wave election.

And then the Pima County Democratic Party said, “Hold my beer” and reminded me why I have little faith in the party to do nearly anything right.

A Tucson women’s group planned a march in support of abortion rights for the 4th of July, named “F*** the 4th” (they used the expletive in full). The county party then tweeted out the event flyer and repeated that phrase in their tweet. This came from the official party Twitter account, checkmark and all.

Where do I start? For starters, naming an event that is just lazy. They could have done something more creative and pertinent, such as “Declaring independence from the patriarchy” or something topical. But no, just unthinking rage. But for the actual party to green light and amplify that? The 4th of July has a popularity level close to puppies and chocolate. To make that the explicit target of your rage simply makes no sense.

Moreover, you have probably seen charges from conservatives about the Democratic Party; some will say that they’re anti-American, that they’ve been influenced by Marxist principles. I generally discounted those as silly, but then an official party account falls right into that trap. They said the silent part out loud in the eyes of many.

Lastly and most devastatingly; it’s Pima County. It’s been both reliably Democratic, where strong Democratic turnout is absolutely necessary for statewide Democrats. It’s also 35% Hispanic, a traditionally strongly Democratic group. That’s changing however, and who can blame them? A demographic that is typically very pro-family, religious, and not too comfortable with abortion, and their home party will make abortion the one central issue and flout a disdain for the country they love. Why would they want to remain in that party, the Party of Anger? When the other party is extremely “pro-family” and Christian, why wouldn’t they switch?

It’s as if the Democratic Party thought that they could hold onto Latinos simply by calling Republicans “racist” and offering nothing more. And it feels like 2022 will be a losing referendum on that thesis.

Will one stupid tweet end Arizona Dems? Probably not. But it’s clear that Democrats have no palatable messaging to maybe their most critical constituency. If Hispanics move to the Republican party, then it will almost certainly be another period of darkness for Democrats in Arizona.