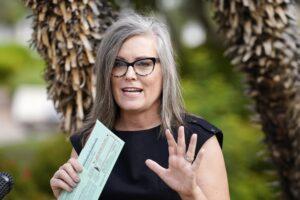 Arizona’s gubernatorial office, located on the 9th floor of the Executive Office downtown, has been constantly occupied by Republicans since the time of Janet Napolitano. This year, Katie Hobbs offers the best possibility for Dems to retake the 9th floor since Napolitano’s last term which ended in 2009.

So can she follow that same template to victory?

To be fair, there are a few striking similarities. For instance, both had the luxury of initially running for an open seat after a term-limited opponent. Also, both ran for the seat directly from a statewide office: Napolitano was previously Attorney General and Hobbs is currently Secretary of State. Also, both have never been known to be part of the political left wing; some might say that Hobbs’ time representing heavily-Democratic district 24 showed a stronger leftward tilt than Napolitano, she still never matched some of the more hard progressive inclinations of others in her party.

While it’s tough to glean too much from her 2002 campaign since not much has been archived from original campaign resources, one notable difference is that she went through the Clean Elections system for both of her successful gubernatorial campaigns. While now eschewed for most statewide races, it provided her a total of $2.3 million in campaign funding in ‘02, which seems relatively piddly now but was significant then. Hobbs has already raised $4.4 million, but nowadays it’s hard to even make campaign finance comparisons; that was a different time, and like the Cold War, the weaponry has only increased over time..

There is a bit of a difference though: temperament.  While Napolitano had a few high profile moments, including speaking at the 2000 Democratic National Convention as well as being involved in high profile legal cases, such as defending Anita Hill and prosecuting one of the accused conspirators with the Oklahoma City bombing, she was known for being relatively centrist and not a bomb-thrower. While Hobbs in-person is relatively mild-mannered, like many other politicians she has used Twitter as a way to gain notoriety, such as tweeting “F*** the patriarchy” (without the asterisks) after Roe vs. Wade. While certainly red meat to her followers, this was not Napolitano’s style.

That said, the similarities and differences may be completely undone with one decision: Hobbs’s choice not to participate in a debate with Kari Lake. While many defenders have come to her defense, it seems evident that her political counsel has decided that it is best to not expose her to conflict, something that will almost certainly be used against her in hard-hitting political ads, and something that Napolitano didn’t need to avoid, as she had honed related skills throughout her career previously. Arizona is not a state to reward weakness, and yet her “handlers” chose that route.

So while Hobbs is in some ways charting a similar path, one of being a relative centrist using a statewide platform to take the next step, it may be completely undone with one decision. We wish that Napolitano would have gotten in her ear and guided her more towards her own path.